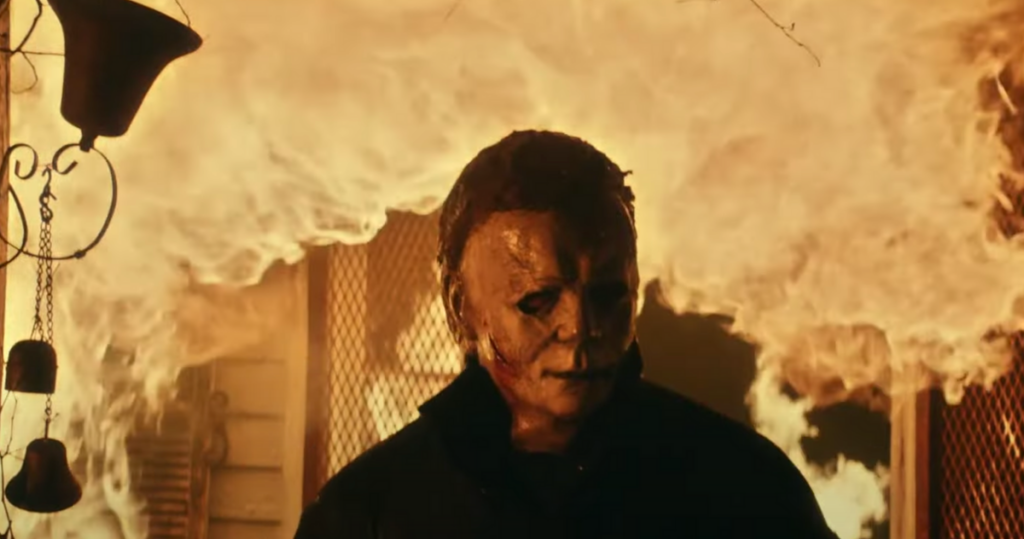 Halloween Kills, which is set to come out on October 15th, released its first full trailer. Filled with stabbings and other gruesome kills of the gore variety, I was left disappointed. With the first installment of David Gordon Green’s Halloween, I felt the same thing; disappointed. But how could this be? I’m a fan of the Halloween movies, particularly 1 and 2. So what are these movies missing that makes me disconnect from them? Then it hit me. Here are my reasons why the Halloween Kills Trailer underwhelms.

When you go back to the genesis of Halloween or better yet, the slasher genre, you have to ask yourself, ‘what worked?’

In most slasher films they depict a teenage girl suddenly thrown into a bad situation through no fault of her own.

This is a common slasher trope because it endears you to the protagonist. It makes you sympathetic and feel sorry for their plight.

Laurie Strode fit this to a T in the first installment to this great franchise.

The trailer makes it a point to mention that Michael Myers is human, but he transcends with each kill.

I much prefer his depiction in the earlier movies because he was portrayed as just a normal serial killer. Though they didn’t say it, he was widely thought to be dead after the second film.

Alas, they ignore the second installment to give us super Michael and here’s the problem with their explanation.

No normal human being can get stronger with each kill. That’s straight up sci-fi and belongs in comics.

Because of that, he’s not human like they say in the trailer.

Over time, I’ve become more interested and entertained by realistic horror. The type of horror that’s likely to occur to you or me if we step outside our house or, in the worst case possible, stay inside our house.

This is what you hear when you turn on the 10 o’clock news and it’s what we dread the most.

I’m not alone in liking this kind of horror. True crime has risen in popularity because of our love of realistic horror. I find myself watching episodes of Unsolved Mysteries because of it.

We like to be scared and what scares us are the bone chilling stories that happen on a daily basis.

Halloween 1 captured the essence of realistic horror in every way imaginable. From Michael stalking Laurie around her neighborhood to him killing her friends for the hell of it.

That vibe of a small town killer is gone here and nowhere to be found.

Watching the trailer, it’s evident that the kill count has taken precedence over the story. I’ve never seen so many kills in one trailer alone.

Even scanning through the comments on youtube, people couldn’t help but to take notice. It’s at the point that Mike took out the entire firefighter unit.

I get that killing is apart of slashers, but when is it too much?

Reason #5: The Hunter Is The Hunted

This one takes a page out of Halloween H2O’s book where Michael Myers is getting hunted for a change.

I fell in love with the dynamic of the killer going after the poor sympathetic good girl. That’s where the money is and has always been. Why reverse that beautiful dynamic for the sake of being different?

In my opinion, Laurie Strode’s story is over. You can only have her being chased by Michael Myers for so long until you have to think of bad stories that reverse who’s getting hunted.

It’s more thrilling and scary when Mike’s on the prowl in the most realistic horror of ways possible. Why fix what’s not broken?

My last of the reasons why the Halloween Kills trailer underwhelms is because of the big budget. I can’t say this enough, but this is a case where you could say money is the root of all evil.

One thing I miss about those earlier movies is just how low budget it looks. What it adds to the vibe is extremely understated.

A movie like Halloween doesn’t need a lot of money behind it. It doesn’t really do it any favors when it comes to the cinematography.

If these Halloween movies are to continue, I’d like them to follow the old blueprint of using a shoe string budget.

What did you think of the trailer? Let me know in the comment section.

5 thoughts on “Reasons Why The Halloween Kills Trailer Underwhelms”