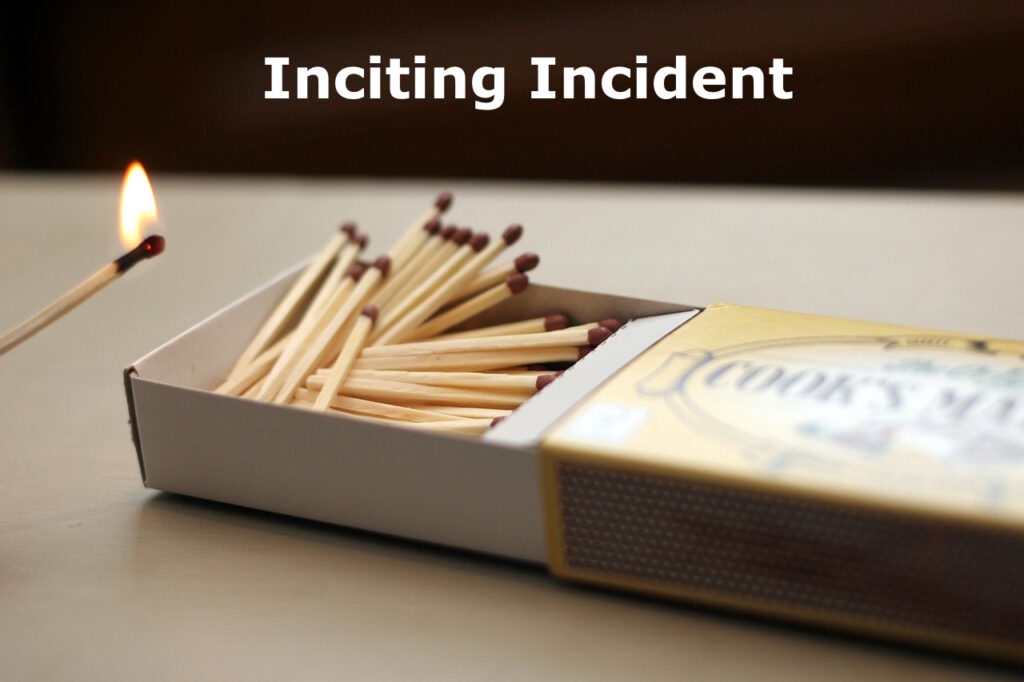 What Is An Inciting Incident In A Screenplay?

You may have different questions in mind when you are writing a script for a movie, like is it about the protagonist or does it occur in Act1 or what story function should it serve?

There are many answers—like in the movie Boogie Nights, inciting incidents happen near the beginning of Act 1or Tootsie when it occurs at the end of Act1.

The terms catalyst, inciting event, and point of attack are used interchangeably for inciting incident.

Here you will learn what is an inciting incident in a screenplay, how to write it and where it should go in Act 1.

What Is An Inciting Incident In A Screenplay? The Three Options

An inciting incident is a confusing thing for new writers who may not easily understand the nature of this term.

It is used to describe three different major plot points during Act 1 in the first 30 minutes of a movie. Now we will discuss the best approach for writing an inciting incident in a screenplay.

For some people, an inciting incident is the moment in the first minutes of a movie that is a big situation and the main character (protagonist) is involved.

Like murdering a man during sex in the opening scene would be an example in some movies, but sometimes this can occur off-screen.

The second definition of inciting incident is that it introduces the main character to the conflict, and they will need to resolve it in the rest of the movie. It happens twelve minutes into the film.

Some people stipulate that an inciting incident occurs around 25 minutes when the main character (protagonist) is hit by major crisis as they leave Act 1 to enter the new world of Act 2.

What is an inciting incident in a screenplay? All 3!

So far, all the above three definitions are correct technically, and you are free to use it to describe whichever of the three plot points above as you see fit.

Whatever you call them doesn’t matter as long as you understand the individual roles. So you have to understand the function of each of the three plot points in Act 1, which is essential.

They called an inciting incident as three different plot points with varying functions, so the first plot point around minute 1-3 doesn’t need to be in your script, but the other two probably do.

Let’s help you understand the roles of each plot point, then take a look at what is best and most deserving.

There are 12 major plot points in Act 1, but here we will discuss the main three in Act 1.

It introduces the protagonist and some conflict or problem for them to overcome during the movie as it will be revealed to the audience through these three major plot points.

When the movie’s opening scene begins, it shows when something special changes for the protagonist. They don’t need to be present.

When it happens, they may not be aware of it at the time because without this plot point, the whole story won’t exist.

The sole reason of the plot point in act 1 describes the need for an inciting incident on that the whole story is based.

In the movie The Bourne Identity, if Jason Bourne doesn’t get pulled from the sea onto the boat, the entire franchise dies in the water.

When the protagonist is seen on screen, it is a call to action. The beckoning of adventure, the phone calls out of the blue and a hologram message from a droid at this plot point.

It signifies the end of the first sequence in Act 1, so you have been introduced to the world of the story and the protagonist, where you can see how they are forced to deal with the antagonist somehow.

Here, the movie’s core conflict has been set in motion whether the protagonist knows or doesn’t.

According to the inciting incident definition three, plot point 3 struggles to get the grips with a crisis established by plot point #2, and this leads them straight to plot point #3.

It is a critical moment that shows what they are up against as the core conflict is locked in, and a significant issue that needs to be solved is established.

In plot point 2, if the protagonist were relatively unaware of the crisis, they would certainly not remain unaware now. It is a moment they are forced to make a major decision to solve any issue.

The important thing to remember is that what you choose to call these plot points is much less important than being aware of the them. They each fulfill a unique and specific role such as;

The inciting incident is the first major plot point in the movie, between one and three minutes. It is a significant change or formative event that creates a fierce connection between protagonist and antagonist.