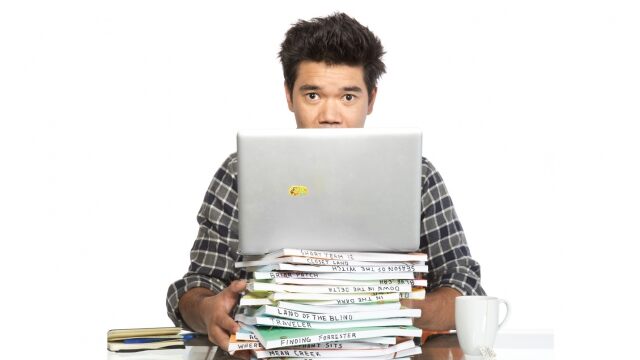 It seems that when it comes to the craft of screenwriting, this is one art form where people like to ask peers if their work is up to snuff. It’s a strange phenomenon to me. Among the places that people gets a ton of traffic from aspiring screenwriters is the screenwriting reddit. Is the screenwriting reddit helpful? I intend to answer this question with this blog post and by the end of it, you’ll know if it’s a good place to spend your time and energy there.

Read that subheading on the picture. When you go to these forums and screenwriting groups, you’re wasting valuable time there that you could use actually writing.

I get it; its fun to spend time conversing with people that share similar interest as you, but this can prove to be a detriment to your personal growth as a writer.

I’m no psychologist, but it’s clear that if you spend more time doing something else rather than writing, you’re avoiding that script and it could be because you don’t have passion for what you’re writing.

If you find yourself in that situation, I suggest that you abandon ship and start working on a new idea for a new script.

The internet is filled with them but it seems that they inhabit the screenwriting reddit and other screenwriting groups a lot more. It’s uncanny.

One thing that you have to know when you go on these groups is that they have dealt with writers that have infuriated them in the past with their posts so you’re already heading into a situation where they perceive you as someone who’s going to waste their time and post nonsense.

They see new posts as someone who just started, wide eyed, and is not privy to the nature of screenwriting. They’re not going to deal with you in high regard or with respect.

Here’s a story that I encountered one time. This didn’t happen to me personally but it was a situation that I observed and further enforced my decision to distance myself from all such groups.

A guy was on there to simply get feedback on a script he wrote. When he was told that what he wrote sucked (paraphrasing), he asked for how he could make it better and received no constructive criticism.

He proceeded to make a post talking about that incident where he received more hate from people subbed to the screenwriting reddit. The lack of empathy blew my mind.

All the guy wanted was constructive criticism for his script and he got unwarranted hate which from the comments I read, verged on the side of online bullying and I can assure you, I’m not the type to cry bullying.

When you ask for feedback and that feedback isn’t constructive, it can be seen as trolling. As a writer, it can be disheartening to deal with such hostility when you’re just trying to find a way to hone your craft.

If you do dare to interact with these people in these groups, do so with extreme caution and always expect the worse. If you’re able to set your expectations low, you might be pleasantly surprised at your treatment.

What you’ll see a lot on these types of groups are people that come on there to get their ego stroked. I’ve seen mods even take part in this too.

They will come on there and post about their script winning a competition or them getting their script optioned.

When you step back and really think about it, there’s really no reason to even post such accomplishments on there other than to hold that over other people in a self aggrandizing way.

Writers are not there to stroke their ego and make them feel great about themselves. They’re there to get help with their screenwriting problems.

Anything that’s not helping other people or discussing the craft, is unnecessary. Celebrations for such accolades should be held with family and friends.

This sounds cliché but it’s true. I liken screenwriting to creating youtube videos or podcasting where in the latter two cases the creators of the content are doing their best to create something good and putting it out there for people to enjoy.

They’re not creating the content and then immediately asking for other people’s opinions on if what they created was good. Some will like it and keep coming back to that content. Some will not and leave.

The constant need for approval from strangers on the internet doesn’t really mean anything at the end of the day. If you’re pitching to an executive, that’s the person that ultimately matters in getting your script in to the right hands.

If you’re going the independent route like I have, that cuts out the approval of anybody in Hollywood and shifts it to people online who most likely won’t be screenwriters themselves.

The screenwriting reddit can be a place where you can link up with people and collaborate on a project. You can get feedback at your own risk and even get advice from some of the pros that frequent the subreddit.

It has some benefits if you’re willing to walk into what can often times be a hostile environment. I wouldn’t recommend any new writers to go there or any screenwriting Facebook groups out of fear that it might discourage them from continuing to write.

Ultimately, this is why I urge writers to not use these groups. There’s little value to be had in them and they should rely on their natural instincts as a storyteller to write your scripts.

Remember this last message; there’s an audience for everything. If somebody doesn’t like what you wrote, there’s others that most likely will. That’s your audience. That’s who you should focus on.