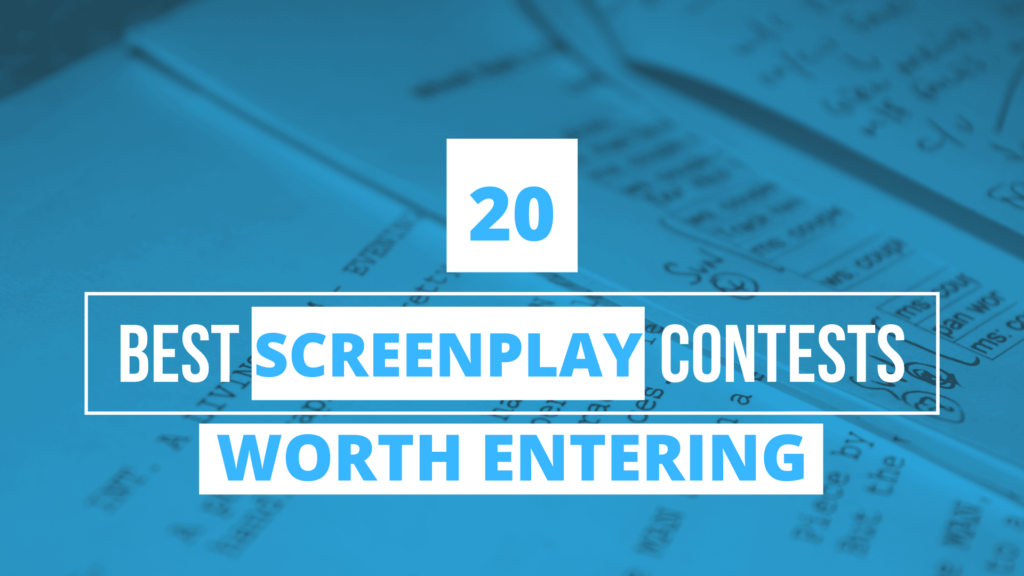 A lot of screenwriters have gotten their break from winning a screenwriting contest. The problem is that there’s so many screenplay contests, that it can be hard to know which ones can kick start your screenwriting career. All contests aren’t created equal. There’s not many that are worth mentioning in a query letter or that can actually help you get off the ground and start a career. Rather than wasting money submitting to a dozen contests, do research and be selective on the ones you enter. With that said, here’s 20 best screenplay contests worth entering.

This one is the most famous contest on the list of 20 best screenplay contests worth entering. Widely seen as one of the top screenwriting contests in the world, the Nicholl Fellowship awards up to five writers each with $35,000 fellowships from the Academy of Motion Picture Arts and Sciences. Warning: they favor drama. But if you place well in the Nicholl, be prepared to get a new cell phone after your old one melts from all the industry heat.

This screenplay contest opens doors by making a system based on networking for new screenwriters to progress their career in the industry. Professionals in the industry see the Austin Film Festival as one of the best contests in 2021, with reps from agencies and production companies having a hand in the judging process.

What makes ScreenCraft one of the greatest screenwriter discovery organizations around is that writers have a range of genre contests to pick from when sending their screenplay. Of those genres, they include action/adventure, drama, comedy, horror, family and more. That means the prizes and readers are more focused and in synch with the writer’s sensibilities and each Hollywood jury is suited for the genre.

The yearly ScreenCraft Screenwriting Fellowship takes film screenplays and TV teleplays. It’s a good program that has helped launch the careers of emerging screenwriters. Previous winners have gone on to sign with agents at CAA, WME, and UTA as well as write for Netflix, Blumhouse, CBS and Millenium Entertainment. People that have won and been finalists in these contests have come from all over the world.

This is a yearly, international film and TV screenwriting contest designed to launch the careers of screenwriters, hosted by Final Draft. It gives screenwriters an award of $80,000 in cash and prizes, including a trip to LA and A-list meetings with executives. Both winners and finalists have their screenplays options and produces and have secured high profile managers as well as lucrative screenwriting deals.

This is one of the best contests around as it has a history of showcasing talented, independent screenwriters and getting them into the industry. The Slamdance screenplay competition has four main categories—feature, horror, short and teleplay/webisode. The top three screenplays in the first two categories get a pass to the Slamdance Film Festival, $2,500 in legal services and membership to the WGA’s Independent Writers Caucus.

Through out the years, the Page Awards have become seen as one of the most significant screenwriting contests. It’s become one of the top sources for new screenwriting talent within the Hollywood community and worldwide. Every year many top producers, agents, and development executives judge the contest and read winning screenplays. Most of the winning writers have landed scripts assignments, secured representation and signed option agreements on their screenplays. Most of them now have films and TV shows in production, on air and in movie theaters.

Furthermore, along with co-sponsors InkTip, TV Writers Vault, and Roadmap Writers, they will actively publicisze and market your winning screenplay. This gives you chance at the ultimate prize: getting your screenplay produced.

Out of all the screenwriting contests, this is the only one to have a five day writing retreat with the best professional screenwriters. The lab was made by Robert Redford in 1981 and has proved to be one of the top ways to break into Hollywood for an aspiring writer. Annually, Sundance Institute gives over $400,000 in financial support to aspiring writers, filmmakers, directors through numerous fellowships and labs.

The Launch Pad is conducted by one of the industry’s top sources for all things screenwriting: The Tracking Board. The goal of the contest is to launch new screenwriters’ careers. A big group of managers, agents, execs and producers await the winners. However, it’s more than a simple screenwriting contest. See it more as a community, dedicated to getting the best screenwriters’ feet in the door.

This is one of the top screenwriting competitions to submit to if you’re an international screenwriter looking to break into the film industry. The winner will receive $5,000. Winners of the BlueCat screenplay competition have gone on to start careers in Hollywood getting signed by a talent agency, sold their screenplays or won major movie festival awards.

Cinestory is a screenwriting competition with a remarkable track record in launching screenwriters’ careers. The best screenplays are asked for by companies such as Paradigm, The Lisa Callamaro Agency, Energy Entertainment and many more. Prizes include cash, but more importantly, a one year fellowship and screenwriting retreat in which they’re paired with an industry professional to guide their career.

11. Save The Cat! Screenplay Challenge

Save the Cat!, the leader in storytelling method, is the only screenplay contest that utilizes the same language the writer, the reader, and the judges use when analyzing your work. All screenplays get a full read. All entrants get fifty points of analysis at no extra cost and the coverage is grounded in structure versus subjective opinion.

This contest is a rare species in the world of screenplay contests. Finish Line allows you to resend your screenplay after you get notes. This increases the likelihood of you winning because as the old saying goes, “writing is rewriting.”

A list of the 20 best screenplay contests worth entering wouldn’t be complete without Scriptapalooza. Another hugely popular screenplay competition, this one doesn’t have as diverse genres as ScreenCraft, but does well to get enough varied genres of film and TV.

Script Pipeline was founded in 1999 and is sort of a competition staple for screenwriters. Although its screenwriting contest is a great way to find talented screenwriters, their focus is just as much in fostering talent over the long haul. The finalists and handpicked screenwriters work with Script Pipeline executives through out the year, receiving ongoing, one on one coverage and broader exposure on their work.

Over the previous two decades, Script Pipeline has produced over $6 million in screenplay and TV pilot spec sales, so it’s worth checking out. Especially, if you’re searching for a hands on approach and continual guidance.

The Scriptation Showcase was made by Scriptation, a script collaboration app used by several productions all around the world. Their screenwriting contest sends winners’ scripts to the directors, showrunners, and producers behind your favorite films and TV shows. The grand prize and top prize winners will get cash prizes and access to Scriptation Industry Pro. The contest also gives coverage through PDF markup. Entrants have the chance to review notes directly within their script and better interpret the thought process behind each suggestion.

This Silicon Valley film festival connects technology and creativity. Still, good old fashioned writing is a big priority for the organizers, who motivate screenwriters through discovery, recognition, and opportunity.

There are rewarding opportunities to network with influential industry professionals. Top 10 finalists in the film category receive passes to the Cinequest Film & Creativity Festival and the exclusive Writers Celebration. They also get exposure to major Hollywood players and inspiring luminaries. Finalists are announced on stage at the event with Maverick Spirit attendees, who are industry icons being honored for their work.

Spirit Award winner, Neil Gaiman, said in a testimonial featured on the organization’s website: “I think the most important thing about Cinequest is it’s definitely the first time I’ve ever come to a festival where my immediate reaction is, ‘What do I have to do to be invited back?’ and that’s not normally my reaction. It’s a perfect film festival in a glorious place.”

In another glowing review highlighted by Cinequest, 2016 feature screenplay winner Jeremy Rush said: “The Cinequest judges’ feedback and scorecards have always been top notch, and Cinequest is a respected and known festival. I had a fantastic experience attending this year.” He began submitting in 2013, and the third time proved to be the charm. His screenplay, Wheelman, was sold to Netflix the same year he won.

This isn’t a screenwriting contest in the traditional sense, but only a select few will be chosen for this intensive, week long winter workshop in LA. So it’s still a competition, but there is no cash award.

Instead, entrants are competing for individualized story and career fostering through one on one coaching with a personal creative advisor associated with parent organization Film Independent. Film Independent runs the LA Film Festival and the Spirit Awards. The Screenwriting Lab also introduces participants to industry professionals for guidance on both craft and business and ends with a pitch event providing the fellows with individualized coverage and discussions with industry executives.

People who value education and experience over prize money should keep this opportunity on their radar and submit when they’re able to really workshop a script with an eye toward production.

A Film Independent blog post announcing the 2020 class of fellows summed up the benefits of this program well. “The support is three-fold: in the validation of one’s talents that participation in the program confirms, in the resources and skills it helps provide its writers, and in the network it helps the writer to further develop.”

Here’s another chance to win some cash and connect with industry professionals. It’s also a direct line to Hollywood studios that partner with the contest to find new voices.

This Coverfly qualifying grant program, started in 2010, aims to find scripts that “challenge us to use our freedom to grow and develop, confront us with our individual responsibility, and examine the consequences of our choices.” Up to six writers are chosen each year through writing samples and personal interviews.

In addition to each writer getting a $7,500 grant, writers are paired with an industry mentor who helps them through rewrites for three months, and then the improved screenplays are submitted to studio executives aligned with the organization. Mentors of the past have included True Blood creator Alan Ball, Shameless writer and executive producer Nancy Pimental, and writer and producer Marc Guggenheim (Green Lantern, Arrow). 2018 winner Charlie Kelly, mentored by Family Guy co-creator David Zuckerman, has since been hired by Warner Bros. to write a film and has sold the TV pilot he was working on with Humanitas to Legendary.

This is a UK based contest, but the participants come from all around the world and the judges are all industry professionals. It probably has considerably fewer entrants than the likes of Austin while giving a much better prize package. It rewards writers with guaranteed industry reads, meetings in Hollywood, and script development.

Rounding out the list of 20 best screenplay contests worth entering is Write/LA. Write/LA offers its participants prizes to anyone in the Top 50. It flies three writers to Los Angeles, puts them up in a nice hotel, gives them a two day private writing workshop, brings in industry professionals to provide advice and answer questions, and then completes the weekend with an invite only live read event at Raleigh Studios. In addition to that, the finalists all get read by an industry insider who gives them written coverage. The head judge does a feedback phone call with every semifinalist. Write/LA does a good job to celebrate you, expand your network, and help you become a polished, more professional writer.

This list concludes the 20 best screenplay contests worth entering.