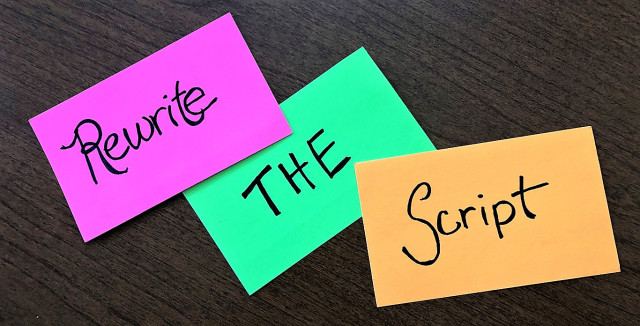 How To Rewrite Your Script

Rewriting scripts is an art and reopening of the finished screenplay to modify and alter some dialogues, scenes, and plot. Suppose you are an excellent rewriter, then it alone is a big thing to increase the chance of breaking through tenfold. A professional screenwriter accepts rewriting as part of the script development to get better and comfortable with it. Here is how to rewrite your script.

The first thing in rewriting is a mental preparation of concept, story, characters, tone, and theme before typing on a laptop. Development starts now by planning how to finish it, as you may already have rewriting before writing something.

Professionals do not write blindly or frantically non-stop with no looking back into the drafts as it won’t favor your work. It would be best if you had an idea in mind, like being prepared to write the script, so you get to know every detail in the first draft. Blindly writing may work in a specific medium like literature, but in screenwriting, it is rather a technical format with such restrictions as broad strokes from the start, middle, and the end.

3. Rewrite As You Go

You must know that most contracts give screenwriters only 10 weeks for the first draft of script so if you are on board for the second draft, you will probably have two weeks. You have to speed up the process but don’t write blindly; that will get you fired. You must take the first ten pages of the script and cut down the description and shorten the scenes then rewrite. Repeat this pattern for the next pages; then, in the end, you will have a focused, tight first draft of your script.

4. Rest After Completing The First Draft

When you are done finishing your script, don’t read it, give to anyone, market it, and just rest for a month. You may not consider such a long vacation but keep yourself away for a week, at least according to the assignment deadline. When you get back, read the script cover to cover without making notes, so the vacation will remove toxins from your mind and make more room to apply rewrite to the first draft.

Now the time has come to criticize your work; that’s a difficult task to look as objective as possible. When you are back from the vacation and read the draft script, not as the original writer, you are now a rewriter. It is a different job, and you have to pinpoint each and single scratch from the writing. You have to do it; if you cannot do it, you are not ready yet; you need to be objective or criticize the writing.

As a professional writer/rewriter, you need to opt-out of the unnecessary lines, dialogues, or scenes that don’t belong or are required. Please find out every flaw of the script, whether big or small and rewrite it. The matter of fact is how to do it, so reread it because reading takes you to improve with rewriting.

It’s a big challenge, though, to quantify the beautiful work you have already put high efforts into, now having to rewrite it. You should be a great read; if you can read it several times, then it will produce more innovative and confined ideas to the mind and improve the script with rewriting.

Every scene, every dialogue, each character, and every line or moment of the script should be apprehended with impressive details and clever foreshadowing by you. It is known as the fun part that attracts the reader, so spice your script with such alterations. The script should have a worth reading start, add some twists, and build the theme by going back to the rewritten script.

You can ask yourself a few questions and find out the answers in your writing, such as;

-Can you identify all the major elements like the first act, mid point, first act break and climax etc?

-Does the main character have a clear ARC?

-Do the stakes escalate throughout the script?

-Does almost every beat have conflict?

-Are the beats almost all active?

-Do any beats repeat each other, or any beats missing?

-Can you say but or therefore between each beat?

-Can any characters or plots be cut out or combined?

You have to cut down the word count from the page; however, you must increase the pacing since rewriting the script is hard. There must be flow in the story, so yes, kill your darlings such as dialogue, line, the scene you loved, so make no mistake and erase them by embracing the truth. It will make a better and great script ever.

You should have some guts, stop yourself by keeping coming back to the script and keep thinking to add it, delete it and save yourself from the torture. You will soon get used to it by killing the darlings of the script. Whatever that going with the script’s flow, such as character, plot point should be deleted. You may have beautifully designed your script with the sequences, gimmicks, one-liners, or visuals. Save them for the next script.

A screenwriter’s career depends on mastering the art of rewriting and well-experienced writing. If you have guts and can rewrite the script by deleting the elements that are not necessary, it will make your spec script better. You must have the courage to delete the things that are worth the effort and time so the more your script will be confined, the more chances to succeed or flourish. When you finish your first draft, it is a significant accomplishment and a beginning to your career.

Check out the above-explained questions if you get the answers to them or not. Criticizing your work is a difficult task, but you can improve your writing and enhance rewriting skills for your scripts to work better in the future.

2 thoughts on “How To Rewrite Your Script”