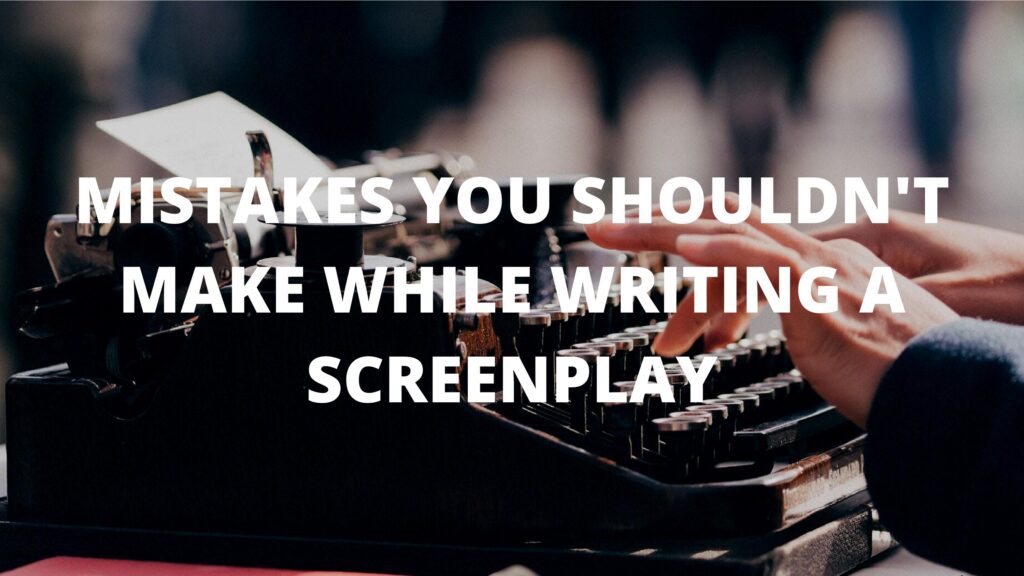 Mistakes You Shouldn’t Make While Writing A Screenplay

Writing is an art and can be acquired by isolating oneself staring down a blank page for hours, creating some conservative ideas of the emotional and structural level. With time your writing can become more vulnerable from the time you spend writing a screenplay. Even pros need to look at the script carefully when it comes to common mistakes or pitfalls. Every screenplay comes with mistakes none is perfect and without errors.

However, you can avoid these common mistakes that can spoil your script writing image before handing it over to the production company. Make sure to read it twice or thrice for the little details or errors a reader can dislike, so always critique your work when finished writing. Here is a list of apparent mistakes you shouldn’t make while writing a screenplay.

First on the list of mistakes you shouldn’t make while writing a screenplay is incorrect formatting. Being a professional screenwriter, you must adhere to a proper format for writing screenplays as the font and spacing may be arbitrary. Still, clarity is required to make it easy to read. The script must be written in ‘Courier’ font and capitalize character names when introducing them, while dialogues must be in lower case. You must download software for screenwriting that will take care of the technical details to focus on the story instead of mistakes.

Do not add so many details to the wardrobe choice or lengthy narrations of the characters’ physical appearance, so skip that thorough description. Since screenplay readers want you to offer few words to explain your character’s soul and restrict its appearance if it’s not vital to the story.

You must understand if you have a fantastic script or story, then a couple typo mistakes can’t make a difference, but if you do it on the first page, it doesn’t show the reader the right image you want to project. You must know the difference between ‘you are’ or ‘you’re’ or use a proofreading service for the script.

4. Forgetting The Plot Of The Story

It would be best if you kept in mind that you are writing a script, so do not skip the story’s outline or forget the plot on which your story is based. Many people are trying hard to get into the list of successful story writers, so don’t be one whose writing goes directly to the trash. Of course, no one will invest in a story or screenplay with incoherent plot or details.

Please do not go off track and keep the story’s flow using the same narrative. You can make sure of this by outlining your story or writing dialogue and actions. You can set your goal to map out the arcs and progressions of each scene.

It is a big mistake; you should avoid quoting other movies or reenactments because the filmmaker can easily catch it and refuse your screenplay. It is too distracting and can take away from the story at hand. Try to write unique and fresh story content for the screenplay.

Simple meaning. Do not try to be a director in your screenplay because it’s not where you should describe the thing. Screenplays are economical blueprints of dialogue, action, and settings, that’s all. You should avoid spelling out camera movements, so don’t use words like camera tracks; instead, say we follow. Your task is to write the screenplay, not to direct it, so as with the dialogues, actors don’t want to be told how to deliver lines. Let them speak and avoid visual and emotional details.

7. Unclear Action Of The Scene

The reader must read the screenplay that looks like a film to work on, so make sure the action is described like it happens. Choreography is essential for the scene’s explicit action and it makes no sense when the action is unclear. You don’t need the whole kitchen details when the woman is washing hands, so you make the reader understand and visualize the scene.

It would be best to limit substantial paragraphs of action or dialogue because no script reader wants a text load without a break. However, the reader can skip over huge chunks and big text blocks, indicating you describe the action in too much detail.

Your story must have a definite end because it makes the reader frustrated when he realizes reading the story and spent 90-120 minutes with no proper resolution. It doesn’t mean your story has to answer the universal difficulties or issues but make good on its promises. It would help if you kept in mind that the story’s arc should be complete at least to roll credits without disappointing the viewers’ expectations.

On the other hand, you must avoid the cheap conclusion without proper struggle. It doesn’t work so punish and then reward.

10. Care For The Visual Medium

Last on the list of mistakes you shouldn’t make while writing a screenplay is lack of care for the visual medium. You can add only a little bit of the character description’s background details but don’t make it look like you don’t understand the film. It’s a visual medium, and much of the information is impossible to show on the screen. Such as many backstories, maybe all of it that the director or actors can fill, avoid non-visual information in the action description. You can save the space for the actual action.

Most importantly, what the director hates the most in a screenplay is the ordering lines, so avoid telling the director what to do unless necessary. You can interpret the lines to avoid confusion but not in an ordering sense to describe how the actor must do that action or scene. At the same time, no one likes to be told what to do, not the director or actor. You better stick to the screenwriting and avoid all the above explained mistakes that you shouldn’t make while writing a screenplay.