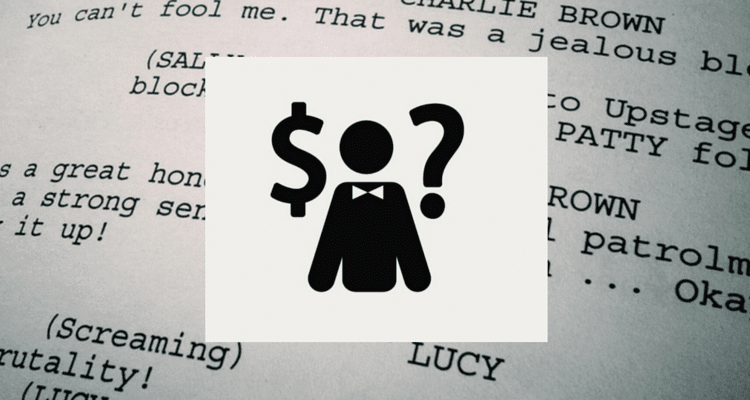 How Much Do Screenwriters Make?

Do you really like screenwriting? If so, maybe it might be worth a try doing it as a career. Go ahead and give it a try. The major problem is that screenwriting is notoriously difficult to break into. To make it in you’ve got to go through Hollywood’s complicated system, particularly concerning their payment. So how much do screenwriters make? This post is going to answer the mysterious case of what a screenwriter’s salary is.

The fact of the matter is that there is no salary. It’s not consistent and it changes from writer to writer. The amount a screenwriter makes in a year depends on three things; the amount of work, the kind of work and the screenwriter’s skill level and reputation.

1. Amount — This isn’t just about how many projects, but also if a screenwriter has to give outlines, several drafts or treatment for each script.

2. Kind — Whether it’s a TV show, a studio film or an indie film, there’s a difference in payment. Is it an original idea or an adaptation from previous material that the screenwriter is writing.

3. Skill Level And Reputation — Veteran screenwriters have more experience in the Hollywood system. Because of this, they are more trusted with the bigger projects. Then there are accolades like being an award winning screenwriter and things like word of mouth in the industry to consider.

If a screenwriter is a WGA member, that dictates how they’ll be paid too. The Writers Guild of America is a labor union that focuses on representing screenwriters in TV and film. It also provides health benefits, a community and guidelines for the immensely intricate work of how to compensate screenwriters for certain types of projects.

The WGA require not only experience writing in the industry, but also a fee of $2500 in order to get in. In this case, you’ve got to literally pay your dues to get admitted. Once you’re a member of the WGA, you’re guaranteed to get paid more than a non WGA writer. The WGA has a list of minimums that screenwriters are to be paid by their employers.

The Nitty-Gritty Of The Salary

Here is a list for TV and feature film work of minimum amounts. A more detailed rundown, can be found at on the WGA booklet of minimums.

Even though the numbers for TV teleplays might be less than features, the reality is that a TV writer’s salary stacks up. Although the numbers for television screenplays might be less than feature films, in reality a television writer’s salary stacks up. TV screenwriters have the luxury of working on several episodes and the work stacks up fast the longer the show is in production.

How Do Screenwriters Get Paid?

These are the three ways screenwriters are paid: assignments, specs, and with residuals.

Assignments are just concepts that have yet to begin development by studio executives and production companies. Producers usually go after a story idea and tell it to studios in attempt to get it made. In what is basically a job interview for a screenwriter, screenwriters come in to pitch their rendition of that idea.

Specs are scripts written from a screenwriter’s own initiation. They don’t get paid for it. Instead they are written because the screenwriter feels passionate about the idea and think they’ll be able to sell the script. If that spec script doesn’t get sold, it’s alright. Writing specs are a great way to get more experience and display to possible employers what you’re capable of. Writers can attempt to sell their specs to existing shows to try and get a job by showing they understand the ins and outs of competently to a degree that they can write for that show.

For screenwriters that have already gone through the rigors of selling a script, they get residuals. Screenwriters in the U.S. are not able to own the copyright to their project. The studios own their work and whenever they reuse the screenwriter’s work, the screenwriter gets paid, which is know as residual money. TV reruns provide the largest residual incomes.

Advice For Spending Your Money

Try not to squander your earnings in one place. A screenwriter’s money is never guaranteed. Even if you manage to sell a screenplay, be wise about how you spend your money until the next script that sells. Frequently new screenwriters are anxious to quite their day job, but getting a screenplay sold doesn’t guarantee the beginning of your screenwriting career. Less than one percent of screenplays bought actually get produced, but don’t let this dissuade you.

Keep hustling if you truly love the craft of screenwriting. The cream rises to the top no matter what. I recommend trying to find a group of aspiring filmmakers who are down to produce your screenplay. It’s good when you’ve got a stack of scripts that you’ve written, but it’s even better when you have an actual movie on deck to show.