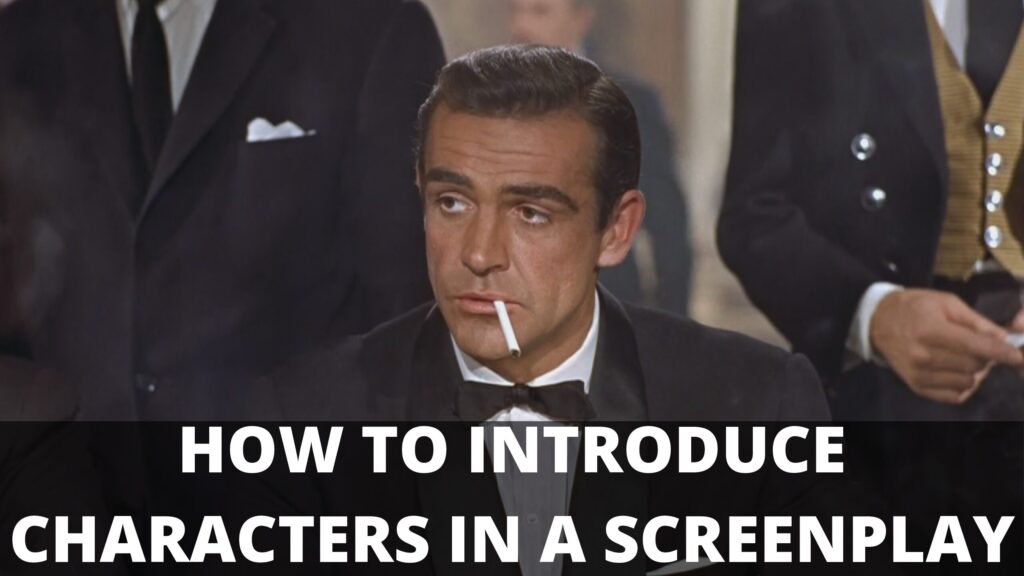 How To Introduce Characters In A Screenplay

Knowing how to introduce characters in a screenplay means more than just understanding how to properly format character descriptions.

You want to think about when, where, and how a decision will play out in the mind of the reader and how it will look onscreen.

Of course, I recommend this, as well. It’s important. But all those great screenplays you’re reading from the professionals, could also be leading you astray.

The writing in professional screenplays is deceptively simple while being so good. You might pick up bad writing habits trying to emulate what you see without taking time to analyze it in depth.

One of the most offensive of these bad habits? Weak character introductions.

If you proceed with this mindset your readers will be left disappointed.
I’ll explain how to introduce characters in a screenplay so that you’ll have rich character descriptions that set a tone for your story.

How To Introduce A Character

Character intros need a bit of formatting, a bit of craft, a bit of art, and a bit of love. It’s a chance for the writer to set a tone with robust and clever descriptions.

A smart writer will weave story elements into their introductions for characters in attempt to increase the reader’s engagement.

This is the standard procedure for introducing characters:

Put the NAME IN ALL CAPS (age range), add some descriptions and traits.

While the majority of character introductions will have an age range and traits, you’re not obligated to use parentheses or add the age range if your think the story and character description will be sufficient without them.

Keep in mind to add a bit of style and insight while also being visual with your descriptions.

Examples Of Character Descriptions In Screenplays

The subtext behind the details and actions is what stands out the most with these character introductions.

The acts of the characters stand as a form of macro social commentary or the motivations.

These are brief character introductions. Cobb has a specific age, while Saito’s age is vague.

In some cases the writer or director care less about character traits and choose to focus their concern on action and plot for the sake of rhythm and intention of each line.

I N T . M A S T E R B A T H R O O M – D A Y
In the steam-filled bathroom, we make out SCHUYLER VAN ORTON, now. He’s handsome, fit and apparently in complete control of his world. He steps out of the shower, wraps a towel around himself and grabs the BATHROOM PHONE.

There are a couple non-visual character descriptions in this introduction that would be considered a screenwriting faux pas in other sections of the script.

Concepts like ‘being in control of his world’ and ‘a man in almost constant motion’ can’t be seen, but they help build the character.

‘A man who has written more books than he’s read.’

Using dialogue from a prior scene or action in lines leading to the introduction, you can do the character description before the formal introduction.

An urbane man in his late 30’s enters the room. Tailored Tom Ford suit, a cigarette hangs from his lips. He adjusts his cufflink, surveys the casino floor…

This is written in only two action lines, which means it’s going to be robust, exciting to read, and mention important production details.

How To Introduce Multiple Characters In One Scene

You can refer to the characters as an ensemble when you have multiple characters in a script that share the same level of importance.

In cases like this, you can introduce characters in a group setting or set up several individual scenes.

What About When A Character Has An Extra Identity Or An Alias?

ANGRY MAN or MASKED VIGILANTE are names you can use to introduce a character before revealing their identity to the reader.

How does a writer keep things clear in this situation?

A screenwriting extension can be used.

It’s fine to put an alias in an extension for some brief clarity. Each time this occurs, it won’t bog down the reader by forcing them to read extra lines of action.

Whether it’s multiple costumes or just one, this is helpful in cases when a character disguises themselves throughout the screenplay.

When Should I Introduce My Character?

For when and where to introduce characters in your screenplay, there are common sense guidelines. You’re better off building some anticipation for your main character instead of having it be the first character that people meet.

In the Inglorious Basterds script, Col. Hans Landa doesn’t appear until after the reader meets the French farmer and his daughter.

We meet Shosanna at the end of the scene and after that ends we meet Lt. Aldo Raines. Even though they were spaced out, these character introductions worked well.

Introduce the main character in the first 10 pages. Don’t wait until page 25.

Where Should I Introduce My Character?

Your character descriptions will be easier if the prep work with regard to theme, plot, setting and character development have been done.

I recommend utilizing a setting that encapsulates your protagonist.

Put him in a computer dungeon of an apartment when people first meet him.

Have people meet him in the middle of a dangerous adventure.

“The most common weakness of character descriptions I read or hear is that they generalize. The details are broad, vague or not visual at all. They neither create a specific image, nor do they reveal anything important or emotionally involving about the character.Sometimes storytellers provide visible descriptions that create an image, but the details are unimportant to the story and reveal nothing of what’s inside the character.

I’ve read countless screenplays which introduce characters in this way: “JOHN, 29, tall and thin,” or “MARY (mid 40’s) an attractive brunette.” As you read those two descriptions, did you get any kind of clear image of John or Mary? Neither will your reader or your audience.

Your goal must be to reveal two or three clear, succinct and vivid details that create a picture in the minds of your reader or audience, and that convey something of the essence of that character.”

“Most good screenwriters cheat a little, particularly when introducing a character. Keep in mind that an audience watching the movie has the benefit of seeing the actor playing the role, and all the specifics that come with a flesh-and-blood person.

Since the screenwriter has mere words, it’s generally okay to throw an unfilmable sentence or two at a particularly important moment. And there’s no more important moment in the script than the introduction of a key character.The best character introductions tend to include both a sense of what you see (the character’s physical appearance) and an intriguing tidbit about their personality and/or situation.

Look for details that have an iceberg quality: only a little bit sticks above the surface, but it represents a huge mass of character information the reader can fill in.”

3 thoughts on “How To Introduce Characters In A Screenplay”