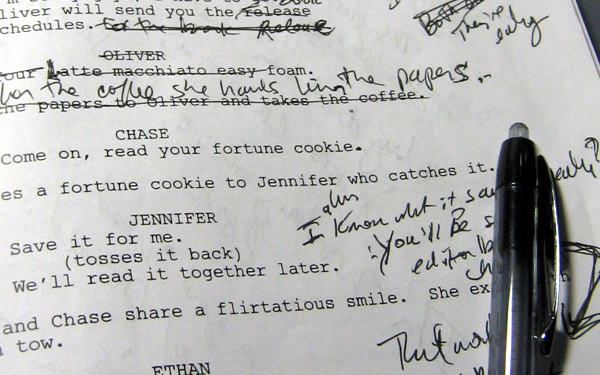 If you’re like most screenwriters, you’ve probably rewritten your screenplay more times than you can count. And while it’s always a pain to go through the process, it’s also necessary if you want to create a great script. In this blog post, we’ll discuss some tips on how to rewrite your script like a pro. So, if you’re ready to start rewriting your script in a more efficient way, keep reading!

What Does It Mean To Rewrite A Script?

Rewriting a script means making changes to the dialogue, story, and characters in order to improve the project.

Sometimes these changes are small, such as tweaking a line of dialogue or changing an actor’s motivation. Other times, they are much larger, such as adding or removing entire scenes.

Sometimes a script is rewritten in response to feedback from a producer or studio executive. Other times, a writer may simply decide to make some changes in order to improve the script.

Whatever the reason for rewriting, the goal is always to create a better story. Rewriting can be a challenging process, but it can also be very rewarding. When done well, it can take an average script and turn it into something truly special.

How Do I Rewrite A Script?

Rewriting a script can seem like a daunting task, but it doesn’t have to be. Here are a few tips to help you get started:

First, read through your script and make a list of all the changes you want to make. This could include anything from minor dialogue tweaks to major plot overhauls. Once you have your list, start working on one change at a time.

Next, take a step back and look at your script as a whole. Is there anything you can do to make the story more engaging or the characters more likable? Sometimes, making small changes to the overall structure of the story can make a big difference.

Finally, don’t be afraid to ask for feedback from friends or family members. Getting an outside perspective can help you see your script in a new light and spot areas that need improvement. Rewriting a script takes time and effort, but it’s worth it if it means creating a better story.

What You Need To Rewrite A Script

Whether you’re rewriting a script for a play, movie, or television show, there are certain elements that you’ll need to take into account.

First and foremost, you’ll need to familiarize yourself with the existing material. What works and what doesn’t? What needs to be changed in order to make the story more compelling?

Once you have a good understanding of the existing script, you’ll need to start making changes. This can be anything from big plot overhauls to small dialogue tweaks.

However, it’s important to keep the overarching story in mind as you make changes. After all, your goal is to create a script that is more enjoyable and engaging than the original.

With that in mind, here are a few things you’ll need if you’re planning on rewriting a script:

How Long Should A Script Rewrite Take?

As any screenwriter knows, rewriting a script is an essential part of the filmmaking process. Whether it’s fixing plot holes, strengthening characters, or simply streamlining the dialogue, a rewrite can often be the difference between a good film and a great one.

But how long should a rewrite actually take? While there’s no definitive answer, most experts agree that it shouldn’t take more than a couple of weeks.

After all, the goal is to improve the script, not to start from scratch. Of course, this is only a general guideline, and some scripts may require more extensive rewrites.

But as a general rule of thumb, if you’re spending more than two weeks on a rewrite, it’s probably time to take a step back and reassess your approach.

How Many Times Should You Rewrite A Script?

Seasoned screenwriter will tell you that there is no set answer to the question of how many times you should rewrite a script.

It all depends on the project, the story, and the writer him or herself. Some writers find that they need to rewrite their scripts multiple times in order to get the story just right, while others are able to produce a nearly finished product with only a few drafts.

There is no wrong way to approach the rewriting process; it’s all about finding what works best for you and your project.

With a little bit of patience and perseverance, you’ll be able to create a script that you’re proud of.

Even the best screenplays can benefit from a rewrite. Whether you’re hoping to attract the attention of Hollywood producers or simply want to create the best possible script for your independent project, taking the time to revise your work can make all the difference.

But knowing how to rewrite a screenplay effectively can be challenging- fortunately, we’ve put together a checklist of key elements to consider as you revise your work.

First and foremost, it’s important to focus on the story. Is the plot engaging and well-paced? Are the characters interesting and complex? Does the ending feel satisfying? If not, it may be time to make some changes.

Next, take a look at the dialogue. Is it sharp and snappy, or does it feel stiff and forced? Are there any awkward silences or long explanatory speeches? Be sure to read your dialogue aloud to get a sense of how it sounds- often, problems are more easily detected when you hear the words spoken aloud.

Finally, pay attention to the overall tone of the piece. Is it funny, suspenseful, heartwarming, or something else entirely? Make sure that this tone is consistent throughout the entire screenplay- if not, you may need to do some additional rewriting.

By following this checklist, you can be sure that your revised screenplay is the best it can be.

What Problems Do Writers Face When Rewriting A Script?

One of the most challenging aspects of rewriting a script is ensuring that the new version is true to the original vision.

After all, it can be easy to get caught up in making changes that deviate from the original concept. As a result, it’s important to ask yourself whether each proposed change is truly necessary.

Does it improve the story? Does it make the characters more believable? If not, then it’s probably best to leave the original scene intact.

Another common problem that writers face when rewriting a script is maintaining a consistent tone throughout. Even small changes can unintentionally alter the tone of a scene, so it’s important to be mindful of how each change will affect the overall tone of the story.

Finally, writers also need to be careful not to introduce any new plot holes when making changes. It can be all too easy to accidentally create a inconsistency that disrupts the flow of the story.

By being aware of these potential problems, writers can set themselves up for success when rewriting a script.

What To Avoid When Rewriting?

There are a few things to avoid when rewriting a script. Don’t try to fix everything at once. It’s important to focus on one thing at a time, whether it’s the plot, the characters, or the dialogue.

Otherwise, you’ll just end up making a mess of the whole script. Don’t be afraid to make changes, even big ones. Sometimes it’s necessary to throw out everything and start from scratch.

And finally, don’t get too attached to your words. Just because you wrote something doesn’t mean it’s going to make it into the final version. Be open to suggestions and willing to make cuts. If you can keep these things in mind, you’ll be well on your way to writing a great script.