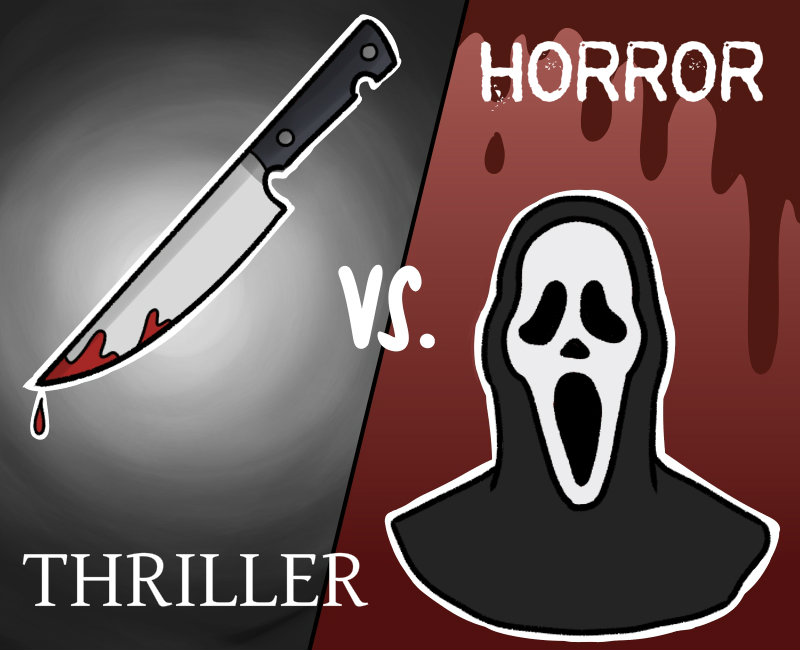 Thriller vs Horror: What’s The Difference?

Knowing the difference between a thriller vs horror movie is important for people who want to know what they are getting into before they watch a movie. If you are looking for a suspenseful movie that will make your heart race, then a thriller is likely what you are looking for. On the other hand, if you want a movie that is designed to scare you, then a horror movie is probably more up your alley.

When discussing thriller vs horror, it’s important to know the key elements of each genre. The key elements of thrillers are suspense, tension, and anxiety. These movies are typically fast-paced and full of twists and turns that keep viewers on the edge of their seats. Thrillers often deal with topics that are dark and may even be considered taboo.

Suspense is a signature trait of thrillers that help illustrate the difference of thriller vs horror. Suspense is used in thrillers by creating a sense of uncertainty or unease about what is going to happen next. This can be done through foreshadowing, red herrings, and plot twists.

Tension is created in thrillers by raising the stakes and making the situation more dangerous for the characters. This usually leads to an increase in suspense as well.

Anxiety is another emotion that is often used in thrillers. This is usually caused by the suspense and tension that are present in the story. It can also be caused by the knowledge that something bad is going to happen, but not knowing when or how it will happen.

Now for the key elements of horror to explain thriller vs horror. Horror movies, on the other hand, are designed to scare viewers. They typically have more gore than thrillers and often feature supernatural elements such as ghosts, monsters, or zombies. Horror movies can be unsettling and may even cause nightmares.

Gore is the most defining trait of this genre and helps explain the difference in thriller vs horror. Gore is used in horror movies by making the violence more graphic and realistic. This can be done through special effects or by simply showing more blood and guts than other movies.

Supernatural elements are often used in horror movies to make them more frightening. These can include ghosts, monsters, witches, zombies, and other creatures that go bump in the night.

Ghosts play a role in horror movies by haunting the characters or the locations where they are. This can be done through special effects or simply by having the ghostly figures appear in the background.

Monsters are often used in horror movies to create a sense of dread and fear. These creatures are ugly looking and have looks that can’t be forgotten. Think Nosferatu.

Witches play a role in horror movies by using their powers to harm the characters. This can be done through special effects or by simply having the witch appear in the background.

Zombies are often used in horror movies to create a sense of chaos and destruction. These creatures can be created through special effects or by simply having them appear in the background.

Horror movies often have an unsettling atmosphere that is designed to make viewers feel uncomfortable. This can be created through the use of dark lighting, creepy music, and jump scares.

Is Thriller Scarier Than Horror

The answer to this question is subjective and depends on the person. Some people find thrillers to be more suspenseful and anxiety-inducing, while others find horror movies to be more disturbing and unsettling. Ultimately, it is up to the viewer to decide which type of movie is scarier.

Do Thrillers Count as Horror?

Thrillers are sometimes classified as a subgenre of horror, but this is not always the case. While thrillers do share some common elements with horror movies, they are typically not as graphic or violent. This makes them more suitable for a wider range of viewers. As such, thrillers are often considered to be their own genre.

Do Horrors Count as Thrillers?

What Effect Do Thriller Movies Have on The Audience?

Thriller movies often have a profound effect on the audience. These movies can be so suspenseful and anxiety-inducing that they leave viewers feeling shaken long after the credits have rolled. Additionally, these movies can also be thought-provoking and may cause people to reflect on their own fears and anxieties. Ultimately, the effect that a thriller movie has on its audience depends on the individual.

What Effect Do Horror Movies Have on The Audience?

Horror movies change the way people think and feel. They can cause people to think more negatively about themselves and the world around them. Horror movies also tend to make people more fearful and anxious. In some cases, horror movies can even lead to post-traumatic stress disorder.

1. The Girl with the Dragon Tattoo

In this movie, a young woman named Lisbeth Salander is hired by a journalist to help him investigate the disappearance of a woman from 40 years ago. Together, they uncover a dark secret that has been kept hidden for far too long.

2. Silence of the Lambs

In Silence of the Lambs, FBI trainee Clarice Starling is tasked with interviewing serial killer Hannibal Lecter to try and catch another murderer who is on the loose. The two form an unlikely bond, and Clarice must confront her own demons if she wants to catch the killer.

In Se7en, two detectives are tasked with investigating a series of grisly murders that all seem to be connected to the seven deadly sins. As they get closer to catching the killer, they realize that they may be in over their heads.

In The Talented Mr. Ripley, Tom Ripley is a young man who is tired of living in the shadow of his more successful friends. He decides to take matters into his own hands, and travels to Italy to take on a new identity. However, his new life soon becomes a living nightmare.

In Gone Girl, Nick and Amy are a married couple who seem to have it all. However, when Amy goes missing, Nick becomes the prime suspect in her disappearance. As he tries to clear his name, he realizes that Amy may have been hiding some ugly secrets.

In Rear Window, Jeff is a photographer who is confined to his home after breaking his leg. While he’s stuck inside, he becomes obsessed with watching the lives of his neighbors unfold. When he suspects that one of his neighbors may have been murdered, he starts to investigate.

In Rebecca, Maxim de Winter has just married the beautiful and mysterious Rebecca. However, upon returning to his home following the honeymoon, he realizes that Rebecca may not be who she seems. As he investigates her past, he comes to some troubling conclusions.

In Spellbound, Dr. Anthony Edwardes is a psychiatrist who has been called in to help treat a patient at a mental hospital. However, as he gets closer to the patient, he realizes that there may be more to her than meets the eye.

In Notorious, Alicia Keys is a young woman who is trying to make her way in the world of professional journalism. However, she soon realizes that in order to get ahead, she may have to make some compromises. When she is given the chance to interview a notorious gangster, she takes it.

In Laura, a detective is investigating the murder of a young woman who was found dead in her apartment. As he tries to piece together what happened, he becomes obsessed with the victim’s beautiful sister. However, he may not be the only one who is interested in her.

In this movie, a woman named Marion Crane is on the run after stealing money from her employer. She checks into a hotel, but is killed by the hotel’s owner, Norman Bates. Bates is revealed to be a psychopath who has been living with his mother’s corpse for years.

In this film, a group of friends are terrorized by a family of cannibals. The most famous scene from the movie is the one in which Leatherface, the family’s chainsaw-wielding son, kills a girl with his weapon.

In this movie, a young girl is possessed by a demon. Her mother hires a priest to perform an exorcism, which leads to some truly horrifying scenes.

4. Night of the Living Dead

In this movie, a group of people are trapped in a house while zombies attack them. This film is credited with starting the zombie genre, and it is still considered one of the most terrifying zombie movies ever made.

This movie is about a group of teenagers who are targeted by a killer. The film features some famous jump scares, and was credited with revitalizing the horror genre in the 1990s.

This movie is about a couple who start to experience strange things happening in their home. They set up cameras to record what’s going on, and the footage is truly terrifying.

This movie is based on the true story of paranormal investigators Ed and Lorraine Warren. It tells the tale of the Perron family, who were terrorized by demonic spirits in their home.

It Follows is about a young woman who is pursued by a supernatural force after being raped. The film is praised for its chilling atmosphere and for the way it makes use of traditional horror movie tropes.

This 2018 movie tells the story of a family that has to live in silence in order to avoid being killed by monsters that hunt by sound. It was praised by critics for its suspenseful storytelling and its strong performances.

In this movie, a man named Freddy Krueger uses his powers to kill people in their dreams. The character is one of the most famous villains in horror movie history and has appeared in numerous sequels.

Whether you write a thriller or horror, hopefully now you understand the difference between thrillers vs horrors? This is a question that has been asked for many years, and the answer may vary depending on the person. Some people may prefer to write thrillers because they enjoy scaring people, but not scaring them too much. Other people may prefer to write horrors because they enjoy making people feel disgusted or frightened. No matter which you prefer, both genres have their own unique benefits that keep people coming back for more.