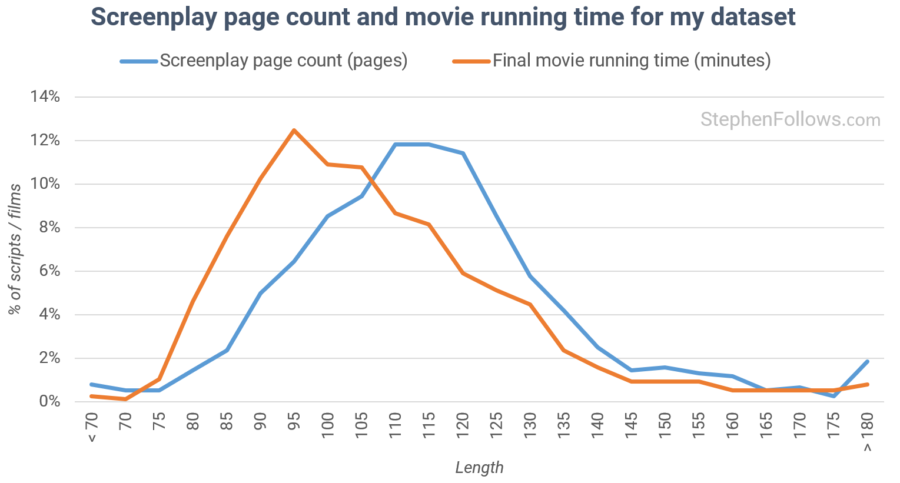 How Long Should a Screenplay Be?

Ever wonder how long should a screenplay be? The length of a screenplay is more important than you think. If you don’t write the correct amount, you’ll risk being people not taking your work seriously. If you get it right, you’ll show competence and an understanding of the craft.

It’s assumed that anything over 120 pages is too long and anything under 90 is too short.

This of course is not a hard rule. That’s the lovely thing about screenwriting, but in general this is how much most screenwriters write for their screenplays.

Films range from 1 hour and 30 minutes to 2 hours long. This is why the 90-120 page rule exists. Every resource from books to gurus will tell you that your screenplay should be in the 90-120 page range.

You should also be aware that different genres have different page lengths. Keep in mind that most are 90-120 pages long as previously said, but also that the length per genre could change depending on the trends in the industry.

If you pay attention to the business, you’ll know when the changes happen. Meanwhile, let’s check out the current page lengths according to the genre:

The right number of pages for this particular genre is 115-120. Writing 120 pages typically isn’t frowned on with this genre. Included in this genre are crime dramas and film noirs.

105-115 pages is where most scripts of this genre come in at. Whether it’s an action thriller, supernatural thriller, or crime thriller, they’re all written to this length.

Comedies usually run to about 105-110 pages. Keep in mind the closer to the former, the better.

Rom-Coms are even shorter than a full-length comedy. Rom-Coms sometimes have a fast-moving chase scene toward the end, which accounts for the lower amount of pages compared to comedies.

90-105 pages will suffice for action scripts. Scenes with sequences of constant action could be a page long, but in actual screen time, it’ll be 3 minutes long.

This is why it’s best to keep action scripts in the lower range but make sure not to write under 90 pages or it’ll be too short.

The safe range for this genre is 100-115 pages. Unlike the former, exotic backdrops and dialogue make up the majority of Action Adventure scripts allowing for the writer to write more pages.

Animation land in the range of 110-115 pages. The director in animation is the writer. Therefore, the writer is able to add camera angles and other directorial references that will make the script longer.

With that said, I’d advise to head to the normal screenwriting rules and not use directorial references even though this genre has a directorial option.

Horror scripts are supposed to be the shortest script your write. 90 pages is the minimum. 98% of horrors have lower budgets, so less number of pages means fewer financial concerns in terms of production.

Psychological Horrors are allowed to be a little longer at 110-115 pages, but if it’s a script that has a lot of visual effects, then try to aim for 90 pages.

How many pages do you write if the script is a combo of genres? Find out which genre dominates most of the script and write it to that genre’s page length.

The reason why you should write scripts to these lengths is because long scripts from unknown writers get ignored by producers. It’s best to stay within the confines of 90-120 pages.

There’s no genre that can be written under 90 pages that would get produced. The reason for this is because film distributors require at least 90 minutes which comes out to 90 pages to qualify for theatrical or cable release.

A screenplay that comes in over 120 pages is assumed to need a lot of editing and go to development hell. Producers will try to make a lot of cuts to keep the script at a reasonable budget.

What the screenwriter has to do is do the hard work in editing the script before sending the script to the producer while they still have control over what gets cut and what doesn’t.

Short screenplays sounds the alarm to a producer that the story structure isn’t good. Things that may have caused this are that the protagonist hasn’t been given enough conflict or the antagonist isn’t present in the story enough.

Not enough setups were written to validate the plot of the script.

The protagonist didn’t have enough conflict to overcome.

The character arc for the protagonist is weak and he hasn’t changed enough for there to be a resolution.

Exception To The Rule

The lone exception are independent scripts that use a small budget to get produced. Because of that, they require a shorter page length no matter what genre they’re in.

However, the writers should still make sure the length of the script is at least 90 pages for distribution requirements.

Several indie films never reach distribution because they’re not long enough and thus, get stuck ‘in the can’. Always write a script that’s at least 90 pages.

Context Of The Rule

There are basic rules in life that we need to follow. Rules of the road for example.

The problem writers are tasked with is that readers think that the length of the film is equal in minutes to the amount of pages. What hacks can you use if your screenplay is longer or shorter?

There is a basis for every movie rule in the Hollywood. Movie theaters need films and they also need to make a profit. Longer films can be shown to audiences fewer times than shorter films. That equates to less tickets and less refreshments sold, meaning less money is made.

Six Hacks Professionals Use To Break The 120 Page Rule

For more information on these hacks, you can read more at raindance.org.

An outline will help you make sure the script is written to the right length. By writing an outline, it’ll help you find plot holes in the story before the actual writing starts.

Make your screenplay viable in the marketplace and adhere to the page lengths above for these genres.