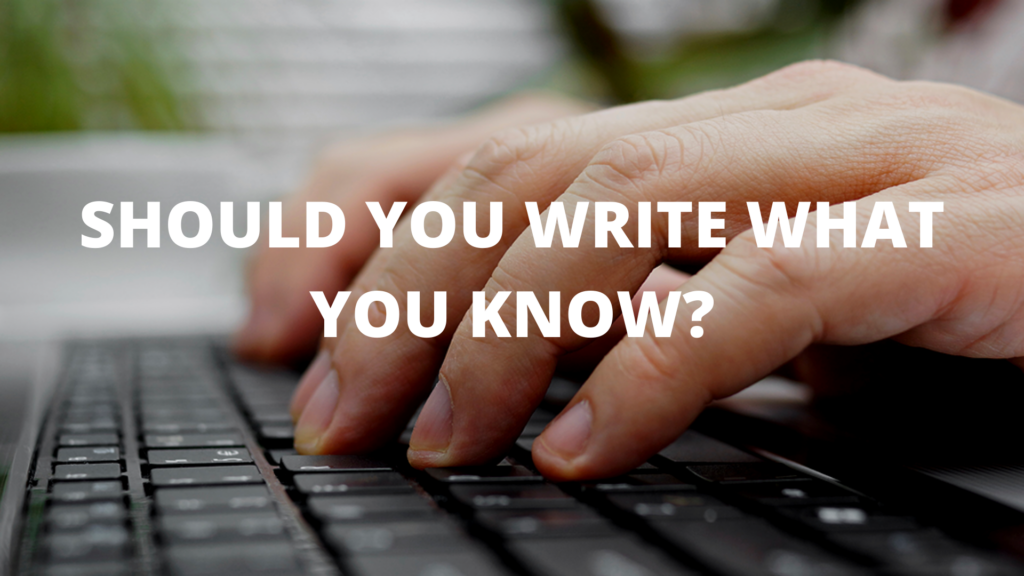 Should You Write What You Know?

You have probably been told to “write what you know.” It’s an extremely popular cliche.

Personal things are what most screenwriters and writers think they would be better off writing instead of making things up from scratch.

In this post, we’re going to discuss whether you should write what you know while also writing a great spec at the same time. One that excites everyone.

What Does This Advice Really Mean?

Film is a great form of entertainment. It takes us into never before seen and imagined worlds through stories. It can also take us into the worlds of screenwriters’ lives and experiences they’ve lived.

Two Ways Of Writing What You Know

Writing what you know can be divided into two types:

♦  Personal. Writing what you have experience of

♦  Fear. Writing what you know about yourself

For example, let take a look at a script about a family dealing with Alzheimer’s.

If it’s something that has personally affected him or something he deeply fears, then he might write the story. Writing about it may be a way of working through it like therapy.

The Problem With The “Write What You Know” Advice

When the “write what you know” maxim is used by screenwriters, it’s usually the first example of the two examples shown above: personal and direct life experiences.

The real life is rarely interesting enough to be made into a film, which is where the problem lies. An entertaining screenplay can’t be written just because it’s a personal and heartfelt story .

Screenwriters that write only what they know, often write bad screenplays because they literally use everything from their life and put that on the page.

Write What You Don’t Know

The antithesis of “write what you know,” therefore, is to write something that you like or what peaks your curiosity. With that said, the write might explore Alzheimer’s for creative reasons since there is no personal connection to the disease.

And let’s be honest: as screenwriters, we can make up anything that we envision in our minds. That’s the beauty of the job.

Let’s say a screenwriter’s expertise is in horrors and thrillers. There’s probably slim chances that they’ve been possessed or hunted by a psychopath in the mountains. They can still write about these subjects even though it’s nothing they’ve personally experienced or know.

This isn’t to say that these stories are better than the ones based on the “write what you know” maxim. These stories can be boring too if they’re poorly executed.

All screenplays face the same problem, whether they’re based on the maxim “write what you know” or not: getting them to buy into the world and story and keeping them invested.

What You Should Focus On

In a sense, whether your script is based off your real life experiences or not doesn’t matter. Unless you tell the reader through a superimposed text, they won’t have any idea.

The problem with a vast majority of specs isn’t whether they’re made up or based on personal experience.

It’s that the story and characters aren’t engaging or compelling.

The Power Of Research

You have to fight this problem with research.

Let’s say a toxic love triangle at college is an experience that Writer A wants to write a script on. It’s really personal and it still saddens her despite the fact it happened fifteen years ago.

And let’s say the dark and mysterious underbelly of Venice, Italy and a group of creatures living under the buildings that eat tourists is what Writer B wants to write a script on, but they’ve never been to Venice.

This writer will have a lot of research to do as he tries to make a diverse and believable depiction of Venice, as well as decorate this world to make believable characters and creatures.

Writer A should also be engaged in similar levels of research like Write B instead of relying on the old adage to “write what you know.”

Research What You Think You Know

What makes movies so great is that we can create anything we want. But great responsibility is required.

Many screenwriters simply don’t put in enough work when it comes to research on the worlds and characters they write about. This should be done whether they’re writing what they know or not.

Readers become smarter when given a vast array of knowledge and ease of access. You could only get away with throwing anything on a page without research back in the 80s.

That doesn’t work anymore. Now you there are people that will jump at a chance to discredit every single move your script takes.

If you have something in your script that you think would only work in an over the top sci-fi, you’ll have a difficult time getting the reader to buy into it.

And this is where the magic is made…

Unless you can get the reader to buy into the choices and actions of your protagonist and the outcome of the story, your script will fall flat.

The audience will check out if they can’t buy into a choice or if they don’t believe what you’re trying to get them to believe.

If you’re working on a script where it takes place in a coal mine, but have no idea about coal mining and have never been in one, the reader will pick up on it fast, unless you:

♦  Speak to people that have knowledge on coal mining, both inside the caves and up above

♦  Go to the library and read articles, books and research manuals

♦  Try watching movies and documentaries about the subject

You’ll know you’ve done your job if the reader makes a comment after reading the scrip that they were surprised the writer hadn’t worked in a coal mine.

The payoff can be huge if you do it right, live it, and know it.

The reason I detest the idea of writing what you know is that I feel like it limits your imagination. Writing should be about pursuing what peaks your curiosity. Why not write about something you want to know about since you have to research anyway?

Your personality will be palpable in each character due to your subconscious. You’re going to know what motivates and drives them when you do research on your characters.

Does Tarantino know about hunting Nazis?

And does Phoebe Waller-Bridge know about being a secret agent?

Great writers don’t get stuck talking only about personal journeys for their characters. Think about what you’re passionate about and write what would get you to go to the theater.

What do you think? Should you write what you know or not? Let me know in the comments.