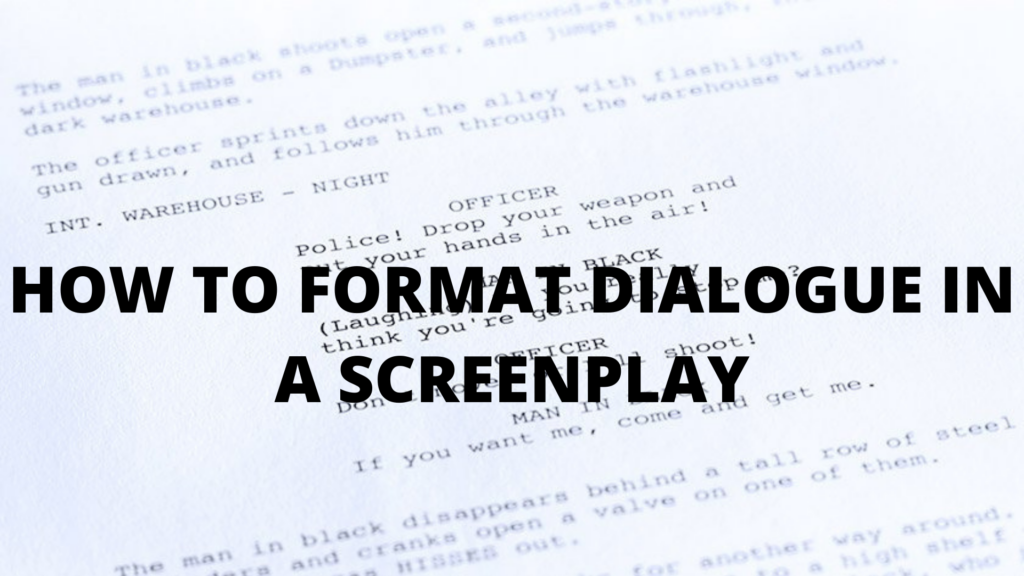 How To Format Dialogue In A Screenplay

Dialogue is the major element of screenplay writing as it’s a conversation between two or more people to deliver information to the audience. Some people spice up the script writing with the appropriate idioms suitable to the character’s background. Usage of sophisticated vocabulary with phrasing and beats of the speech that shows the education and attitude of the character is dialogue.

Dialogue is written for the screenplay characters in a simple form, whereas writing adds the subject line with inverted commas next to the character’s name. Every character has the dialogue they have to speak in the screenplay while performing acts. There is also a subtext that means the character must do the thing without pronouncing and leaves unsaid. If your character keeps true thoughts and feelings, your story will have greater tension and emotional resonance.

While writing a script, don’t write the dialogue in the center of the page. Each line should begin with the same column (2.9 inches away from the left).

How To Format Dialogue In A Screenplay

Before writing dialogue for the screenplay, you must be careful about the things listed below.

When formatting a script for the movie, remember your script isn’t a play, so dialogue shouldn’t look like many monologues. So you must keep 95% of the dialogue to three-lines or less on the page as it must found in a quick back and forth exchange, not prose-y speeches. Keep the dialogue snappy it will be moving, so a fast-moving story like a fast-moving script will be entertaining. It can also move so fast that you don’t realize whether it’s high quality or not. All you will know is that you are entertained.

The foremost rule of writing a script is to keep the dialogue as short as possible, quick back and forth, and get the actual plot and character quick. Remember, you don’t get many monologues during one show, but you get what sticks to your gut. That is the best use of monologue.

You must know about subtext; it’s the unspoken or less obvious meaning or message in the literary composition of speech, drama, or conversation. So it is not purposefully or immediately revealed through the story itself; if it does, it’s bad dialogue. Let’s get to this by an example. If the protagonist runs into his ex-girlfriend with whom he had broken up, met her, and talked, then the conversation will not be open and would have hidden meanings that a reader or audience can understand by knowing the story.

When it comes to dialogue and subtext, the character will not share his feelings or thoughts about her. There is no need to explain repeatedly in speech when you already know the background of the conversation. So the dialogue is good when they do not lack the subtext and deliver the character’s mind to uncover it.

3. Characters all sounding the same

The most important thing to keep in mind while formatting dialogue in a screenplay to make it quality material is that all the characters shouldn’t sound the same. Many writers are there who make this mistake, and their work loses its worth and is rejected. You need to understand that every character is a living, breathing, and thinking person with different needs and points of view; they are not toys but humans.

Distribute the objectives of the characters by fleshing them out and then work on the dialogue accordingly. In the form that they must go with the story plot. Like what a character wants from its life and goals. Your story will present on the screen by different people, so as everyone has a distinct personality, the dialogue should be formed accordingly.

Here, it doesn’t mean about the character’s style but to know the core and approach toward other people. Enormous things come with dialogue like vanity, humor, selflessness, and a character’s delivery style. Every detail like knowing the core, little actions like drinking or smoking and inserting the cigarette into his sleeves.

4. Word Pictures / Visuals within the dialogue

Written scripts must have quality action that immediately creates an image in mind of how to perform it. It means every word has the power to picture and easily come to mind whenever we read it. The character must understand every dialogue, and grasp what is being talked about not just reading the dialogue as it is written in the script. So the dialogue should have a visual fashion, and when the audience sees the movie, they can feel each word.

5. Leaving the obvious out

It’s quite self-explanatory; it may be known to you because it’s another great dialogue about leaving the obvious out. It would be better with the subtext, but it comes at it from a different angle. It’s like when the audience expects the character to say something but doesn’t say or do anything, but we get it anyway by how they look at each other.

6. Changing the obvious up

Something changes the obvious up as the audience expectations turn them on its head, such as the female protagonist asking the male to marry her. However, it’s the 21st century and this hasn’t yet happened in the movies, so it’s unexpected.

A dialogue that represents what was said earlier and is referred to again by the character is a callback. The script could inject humor and dramatic effect as well, and feature a call back, leaving or changing the obvious up.

The above article was about how to format dialogue in a screenplay; you should learn all the tricks and tactics to format the dialogue in the script. The producers and managers would not consider the typo-ridden, poorly formatted screenplays, so be careful while doing this. You can also have any good screenwriting software from the market and focus on the consistency of the story so you can produce a masterpiece.