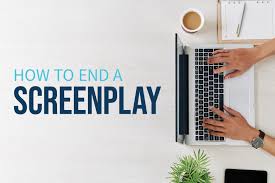 How To End A Screenplay

Knowing how to end a screenplay is a vital part of the screenwriting process. Screenplays are structured vehicles for stories, and as such they must have a clear beginning, middle and end.

The ending is arguably the most important part of the screenplay because it’s what leaves audiences with a lasting impact. In this blog post, we’ll discuss how to end a screenplay properly in order to achieve that desired effect.

While there are many different ways to effectively end a screenplay, this blog post will focus on some general rules that all screenwriters should follow in order to ensure their story has a proper conclusion.

Why It’s So Hard To Write An Ending

Any experienced screenwriter will tell you that one of the most difficult parts of writing a screenplay is crafting a satisfying ending.

This is because there are so many elements that need to come together perfectly in order for the ending to work. The plot needs to be resolved, the characters need to be developed, and the themes need to be explored.

In addition, the ending needs to leave the audience with a sense of closure. all of this is easier said than done.

Crafting a perfect ending is a daunting task, but it’s one that every screenwriter must face. With a little practice and a lot of patience, it is possible to write an ending that will satisfy both you and your audience.

How To End a Screenplay In a Technical Sense

In a technical sense, a screenplay should end with the words “THE END” centered on the page, followed by FADE OUT. This indicates to the reader that the story is complete and that the characters have reached their final destinations.

However, it is also important to consider the emotional impact of the ending. The last few scenes should provide a sense of closure for the characters and leave the audience feeling satisfied.

With this in mind, it is often advisable to end with a quiet moment or a touching scene that ties up loose ends and provides a sense of resolution.

15 Tips On How To End a Screenplay

Writing the ending to a screenplay can be one of the most challenging parts of the writing process. But with these fifteen tips, you can make it a little easier.

1. Know your story. Before you can write an ending, you need to know what story you’re telling. So take the time to outline your story and figure out what needs to happen in order for it to reach a satisfying conclusion.

2. Create a suspenseful climax. The best endings are those that leave audiences on the edge of their seats. So make sure your climax is full of suspense and tension.

3. Pay off your plot threads. All throughout your story, you’ll be planting seeds for later payoff. And in the ending, it’s time to finally provide that payoff. Address all of your plot threads and make sure the resolution is satisfactory.

4. Make it emotional. A good ending should leave audiences feeling something. So don’t be afraid to go for the emotions and tug at heartstrings.

5. Leave some questions unanswered. An ending doesn’t have to tie up everything in a neat little bow. In fact, sometimes it’s more effective to leave a few questions unanswered. This can create a sense of ambiguity and intrigue that will stay with audiences long after they’ve left the theater.

6. Stick the landing. Once you’ve figured out how you want your story to end, it’s important that you stick the landing. Don’t cop out with a cheap or easy ending just because it’s easy to write. If you’ve been knocking it out of the park throughout your screenplay, don’t let yourself down with a subpar ending.

7. Kill your darlings. This famous piece of advice applies just as much to endings as it does to anything else in your screenplay. If there’s something you’re really attached to but it’s not working, don’t be afraid to cut it out – even if that means changing the Ending entirely . What matters most is that you tell a good story, not that you stick to your original plan no matter what.

8. Get feedback. Once you’ve written an ending , it can be helpful to get feedback from others – whether that’s friends , family , or other writers . See what they think about your ending and whether they have any suggestions for improvement .

10. Have several endings in mind. As you’re writing , it can be helpful to have several possible endings in mind . That way, if one isn’t working, you can easily switch gears and try something else. Having multiple options also helps prevent writer’s block, since you’ll always have something else to fall back on if your first idea isn’t working out.

11. Consider what kind of ending would be most appropriate for your story. Is it a happy ending, a tragedy, or something in between?

12. Don’t be afraid to subvert expectations. A good twist can make for a very memorable ending.

13. Keep the ending concise. There’s no need to drag out the finale longer than necessary.

14. Make sure that the ending feels earned. The best endings are those that feel like they were inevitable from the start.

15. Don’t force it. Let the ending flow naturally from the events of the story.

Writing An Ending With a Post Credit Scene In Mind

Writing a satisfying ending for a screenplay is no easy feat. Not only does the ending need to tie up all the loose ends of the story, but it also needs to leave the audience feeling satisfied.

And if you’re planning on including a post-credit scene, that can add an extra layer of complexity to the task don’t worry. With a little planning and forethought, you can craft an ending that will perfectly set up your post-credit scene.

Here are a few things to keep in mind when writing an ending with a post-credit scene in mind:

How To Write An Ending That’s Not Cliché

There are many ways to end a screenplay without resorting to clichéd techniques. One way is to have the protagonist not achieve his or her goal.

This can be satisfying for both the character and the audience, as it provides an ending that is different from the norm and one that the audience wasn’t expecting.

Another option is to have the protagonist come to a realization or understanding. This type of ending can be poignant and thought-provoking, leaving the audience with something to ponder long after the credits have rolled.

Finally, the ending can simply be open-ended, raising more questions than it answers. This can be frustrating for some viewers, but it can also spark lively discussion and debate.

Whichever approach you choose, make sure that your ending is original and memorable. Avoiding clichés is essential for any writer, but it’s especially important when crafting the conclusion of your screenplay.

With a little creativity, you can ensure that your ending will be both impactful and unique.

Here are a few examples of great endings from some of Hollywood’s most iconic films.

In order to write a strong and effective ending for your screenplay, keep in mind the following tips: make sure it fulfills the requirements of a good ending, provide a sense of closure, leave readers with something to think about, and avoid being too predictable. If you can successfully incorporate these elements into your ending, you’ll have written an ending that will leave audiences satisfied and impressed. So what are you waiting for? Start writing!