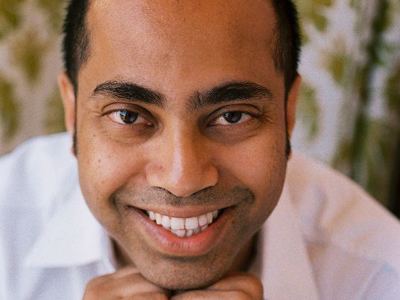 The following is an interview with Kamran Pasha. He’s a professional screenwriter whose credits include being a writer and producer on the NBC series Kings, producer on NBC’s Bionic Woman, and co-producer and writer on Showtime’s Sleeper Cell which was nominated for a Golden Globe and Emmy.

RS: Hi, Kamran. So tell me how did you get into screenwriting?

KP: I was in graduate school getting a law degree and an MBA. I was in an accounting class and I was bored and frustrated. I wrote my first script in that class — a teen horror movie — to entertain myself. A couple of years later, I was working as a lawyer in New York and sent that script out and an agent liked it and represented me. I sold my first two scripts to Paramount and moved out to LA to become a full time screenwriter.

RS: What’s it like being a screenwriter in Hollywood?

KP: I love the craft of screenwriting. The business end of it is more challenging. You often have to work with difficult people who don’t share your creative vision. But I’ve been doing it for 20 years, so I’ve found a way to negotiate the divide between the creative and business sides of the industry.

RS: Which medium do you prefer to write for, film or tv and why?

KP: I love both, but television is more of a writers medium. In film, you are a work-for-hire for the director and producer. In TV, the writers are in charge of the process. It’s a better venue for writers to express their creative vision.

RS: Do you consider screenwriting contests to be worth the time for screenwriters to break in?

KP: Screenwriter contests are a valuable way of getting your work out there in front of industry professionals. I encourage people to submit their scripts to contests and participate in film festivals. This entire town is about connections and relationships. You need to be putting your work out as much as possible to get noticed and break in.

RS: How does a new screenwriter go about selling a script?

KP: You need to find an agent or a manager who will represent you and try to sell your script. I didn’t know any when I started out, so I sent out query letters to agents telling them about my horror script and asking if they wanted to read it. I was rejected by everyone, except for one agent who said to send it over. He was the one who represented me and sold my first projects. Finding the right agent for you is a personal process. Try any angle you can, from queries to getting your work into screenplay contests to the Blacklist. It’s never easy, but it can be done. Persistence and patience is the key.

RS: How can a screenwriter get a manager?

KP: Same process as getting an agent. Try to get your work noticed any way you can, through connections and contests.

RS: Should a screenwriter live in LA to make it easier to break in?

KP: I was in NYC when I sold my first two scripts and then I moved to LA. You can write from anywhere, but ultimately LA and NY provide the best contacts to advance your career.

RS: How can a new screenwriter find people in the industry to pitch to?

KP: As I’ve mentioned, it’s about getting your work out through whatever means available. I used queries. Submitting to contests, film festivals and on online sites like the Blacklist are the primary ways if you don’t have industry contacts to start with.

RS: If a screenwriter wanted to get their script produced for Netflix, how would they go about doing that?

KP: Get an agent or a manager. Without representation or industry friends, you have no way in. Make short films if you want to be a writer-director and submit those to festivals and contacts. Getting to Netflix is the late stage of the journey, not the beginning.

RS: Many screenwriters have to send their queries to the assistants of producers where they never end up hearing back. How should they deal with that and is there a way around the assistant routine?

KP: Rejection and lack of response is the name of the game. I’ve been doing this 20 years and still have to deal with it. You just move on to someone else if you are not getting a response. If you get a response and it is negative feedback on your script, be brutally honest with yourself as to whether the criticism is fair and you should consider a rewrite. Sometimes the critique isn’t fair and the person just doesn’t get your work. You have to follow your heart and intuition.

RS: It seems like Hollywood is in a phase right now where social politics seems to take precedent over telling good stories. What’s your thoughts on that and has it impacted you negatively or positively?

KP: Hollywood is definitely in a phase right now where politics and social issues predominates the conversation, which is not necessarily a good thing. Movies have always been political. But when politics and preaching social agendas takes precedence over good writing, the project flops with the public. Tell the stories you want to tell. If there is a political message, fine. But if your script is bad, nobody will care about your message and you will undermine your cause.

RS: Is there anything about being a screenwriter in Hollywood that bothers you or that you wish was different?

KP: The business part of it is always difficult, People making the decisions as to what project is greenlit and how it is done often have no idea where the audience is. A good screenwriter should be tapped into where society is and what it wants from storytelling, but the decision makers often don’t see what you see.

RS: I read that the majority of screenwriters make 5 figures and that only the top 1% make the real dough. Is there any validity to this and if so, how do screenwriters manage to get by in such an expensive part of the country?

KP: Things are probably even worse than that. There are about 15,000 Writers Guild members and perhaps only 10% of them work regularly. Of that, maybe another 10% are wealthy. Most writers I know are just getting by and often have to work other jobs as their primary source of income. Being an artist is hard, and so one has to accept the lifestyle and persist through the down periods.

RS: What is the number one reason some screenwriters are not able to break in?

KP: Lack of persistence. You don’t need talent to succeed. I know quite a few writers who are hacks but have successful careers. I also know talented people who gave up and left the industry because they couldn’t handle the uncertainty and pain of being an artist. Persistence is the only thing that matters. Even if you fail for a decade, you have to keep writing. Eventually a door opens if you stick around.

RS: Some screenwriters have started using alternative methods to build value for their work by doing youtube, podcasting and blogging. In a way I liken it to an author that sells to the public first instead of going straight to Hollywood for them to produce their idea. Would you recommend that screenwriters do what they can to build a following for them and their work in an effort to remove the risk of a studio investing in a totally new intellectual property?

KP: You have to try any angle you can, including blogging, writing books and short stories, and making your own films for Youtube. That is all part of the persistence of being a writer and trying to get noticed. But you also have to actually write scripts if you want to be a screenwriter. Without scripts, you will never become a professional screenwriter.

RS: Hollywood has always adapted books for movies. The authors of those books made out quite well after Hollywood paid them to produce their book as a film. The reason why they paid them so well is because they knew they could make a return on their investment based off the success of their books. I personally see a script like a stock and it’s better to sell that stock at its highest value as opposed to writing a script and immediately trying to sell it at its lowest value. Do you think it’s wise to continually attempt to sell a script without sound marketing to increase its value and worth like authors and other artists do?

KP: I am a published novelist as well, so I support writers telling stories in any venue they want. Both my novels are adaptations of screenplays that I wrote first. It can go either way, book to screenplay, or screenplay to book. But a brilliant script will always have a market, even if there is no underlying book or other property it is based on. THE SIXTH SENSE was an original idea and a fantastic script that created a bidding war. Tell the story you want to tell. Trying to second guess the marketplace only leads you to confuse yourself and leads to creative paralysis.

RS: In light of the rise in independent content creators, do you foresee a future where more screenwriters attempt to monetize their scripts in other ways instead of the traditional way of working in Hollywood?

KP: There will be more avenues for telling stories independently, but Hollywood is not going anywhere. You can’t make a $100 million action film or science fiction epic without the financial backing of the studios. Independent film is great and will continue to expand, but traditional studio filmmaking will always be around.

RS: People nowadays say Hollywood only produces reboots, remakes and sequels, but we know this isn’t true when you actually do research. However, there is a reason why they feel that way. The established film franchises get the biggest marketing budgets compared to the unknown, new movies. The problem lies in the money distribution for marketing. Do you think it would be better to distribute more money in marketing to the new movies instead of the established ones in an effort to create newer franchises and decrease that sentiment that they don’t make anything new anymore?

KP: Yes, marketing is key to get new projects the attention they deserve. But the real issue is that many of the decision makers are afraid of putting their eggs in an untried basket. If an original film flops, they might get fired for wasting the studio’s money on a risky venture. If a film based on a pre-existing property flops, they can protect their jobs by saying: “Look, there was a massive audience for the first movie, how could anyone predict that the sequel would fail?’ As long as decision makers fear being penalized for taking risks, they won’t take risks.

That concludes the interview with Kamran Pasha. I hope it was useful and that you can take something from it to help your journey as a screenwriter.