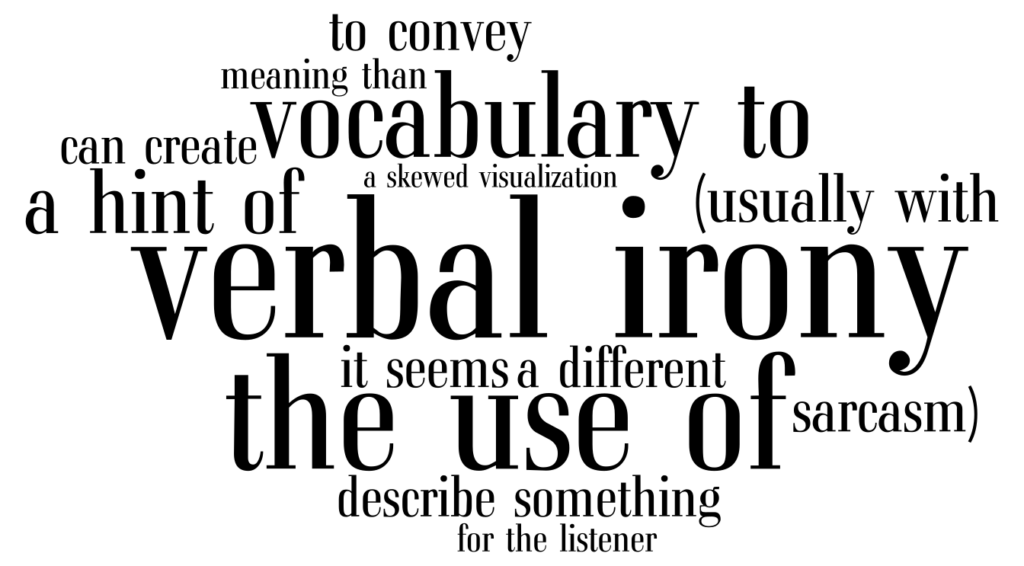 How To Write Verbal Irony

Do you know how to write verbal irony? And do you know what it is? Verbal irony is tied directly to language that’s used every day, making it the most common form of irony. So, what is it? And does it have different subtypes? When using verbal irony in your script, it provides depth and complexity to the dialogue and characters.

There’s a saying that goes, “State what you mean, and mean what you state.” It’s safe to assume who ever said that phrase was not a fan of verbal irony. I’ll explain the definition of verbal irony soon, but for now, think about that fact.

Dialogue is one of the essential elements of screenwriting. Of course we have silent films and quiet moments, but the dialogue is where all screenwriters cut their teeth and prove what they’ve got. It’s the place where you can prove you should write up other screenplays and can impress executives.

What Is Verbal Irony?

We need to define verbal irony first. Unbeknownst to us, we use it quite often and though it’s easy to understand, the nuances need to be discussed.

It can be very powerful when writing dialogue. It can be very uninteresting for the actor saying the lines and audience when a character says exactly what they mean.

Good dialogue has nuance, subtext, and it leaves room for interpretation. Comedy, romance, and reveals of character traits make use of this type of irony. When a character says something, it adds depth and complexity to it.

Continue to see examples of what it looks like.

Jim’s always pranking Dwight in The Office. Dwight is very gullible which is why Jim is so successful doing this. Anything you say is believed by him, particularly if it’s something he WANTS to believe… like vampires for example. Dwight believes he is slowly turning into a vampire when Jim uses verbal irony to convince him he is. It’s hands down one of the best pranks of the show.

The Princess Bride is an example of verbal irony being used romantically. Westley says, “As you wish” instead of “I love you.”

It’s direct to say “I love you”, but using an alternative or creative phrase will be much further up on the index of romance.

The king of verbal irony is without a shadow of a doubt Chandler Bing from the TV show Friends. He uses humor as a defense mechanism, particularly when he’s nervous . That’s a dynamic character choice.

In the next section, I’ll explain the different types of irony and how they work together to make sharper and layered dialogue.

Many assume it’s sarcasm when they hear verbal irony, but there’s a small difference between the two.

Sarcasm has a bite to it; an attitude with intent to hurt or mock someone. The extent of cruelty can range from downright nasty to light hearted joking.

Duplicity and deception is what Mean Girls is all about. Cady figures out Regina George, Queen of the Plastics, is not foreign to these concepts.

This is key: not all verbal irony is sarcasm , but all sarcasm is verbal irony. Double entendre statements are used by people to poke fun and to heighten emotions in a certain scene.

Many times, these statements are used in the comedy genre, since they have tendency to undercut or give comedic relief, but they can apply to every genre.

There is always confusion between irony and sarcasm, but hopefully you understand the difference between the two now.

Read on for a thorough definition of sarcasm, with more examples from movies and TV shows.

You can use this type of irony in two ways; overstatement and understatement. You can either exaggerate or minimize the presentation while still saying something that you don’t really mean.

For example, it’s an understatement when it’s 100 degrees outside and someone says, “It’s a little warm.”

Kansas is a vastly different place than Oz. The moment Dorothy steps through the door into a bright world of strangeness, we see this for ourselves. A great example of understatement is her famous line, “Toto, I have a feeling we’re not in Kansas anymore.”

On the flip side, if they make a statement like, “It’s hotter than the sun out here!” they are making an overstatement. Both are statements of irony. The first statement tries to minimize the truth while the second statement exaggerates it.

In 101 Dalmatians when Rolley describes just how hungry he is, he makes a classic overstatement.

Continue for a more thorough definition of understatement and overstatement, including more examples from movies and TV shows.

Socratic irony is when you play dumb in order to draw something out of someone. For example, in order to trap you in a lie, your parents play dumb even though they know the truth.

Names after a Greek character named Eiron who used wit disguised as ignorance to defeat his opponent, this is where the whole concept was born.

Verbal Irony In All Genres

Every kind of writing has contrasting lines. Across every single genre out there we can see the verbal irony in dialogue.

Even if it’s a guy on a bad date in a rom-com saying, “This is going great,” to a person in a scary movie or show exclaiming, “I’m not scared at all.”

We can find specific examples to check out for further analysis.

You can use these examples now that you know how to write verbal irony for your screenplays.