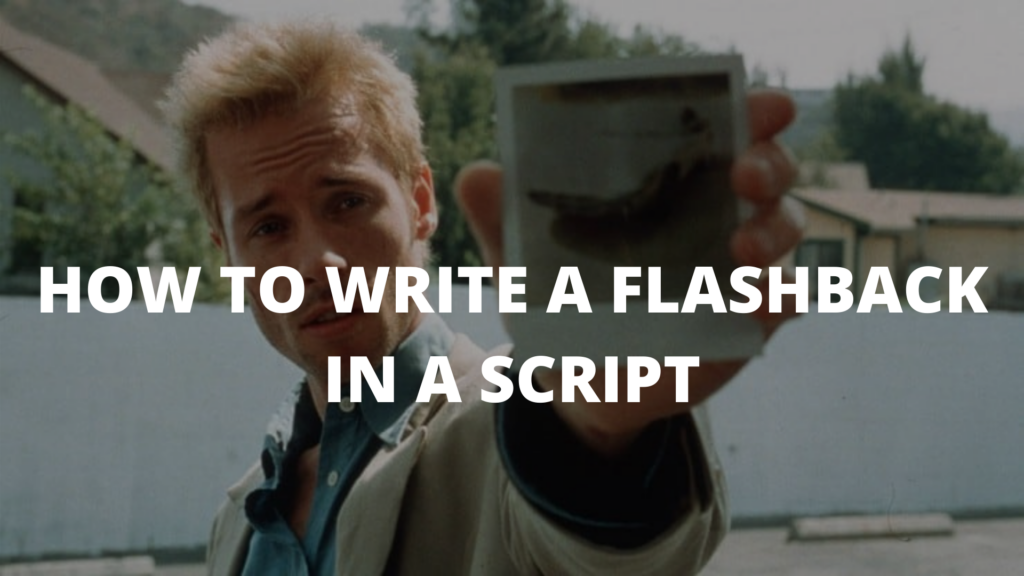 How To Write A Flashback In A Script

A flashback is an interjected scene that takes the narrative back from the story’s current point. It crucially recounts the events of the backstory that happened before the current events. Most of the time, flashbacks come at the moment of trauma for a character in the present, triggering a memory of the past as they are memorable moments in cinema history. Moreover, it’s a scene that happened in the past, reinserted in the present narrative to advance the story, theme, and characters.

Before writing a flashback in a script, you must learn it entirely as there are two main categories of screenplay flashback.

When the scene turns from the linear narrative, and a character reminds of the past, this type of flashback is occasional in most movies. It is just a brief past illustration that is important to develop the story before returning to the present.

The story remains in the past for extended sequences, as the character knowingly explains the story to figure out the mystery or sometimes autobiographical or sometimes both. You can get the example of the film Titanic.

The “never use flashbacks” myth

You must have heard something from the senior and professional screenwriters that never use flashbacks in the script. If you know how to write a flashback in the script and properly implement it, it increases attention to the narrative. But if you don’t know much, don’t try because flashback can be a powerful device and even damage the plot.

-Flashbacks can take us right inside a character’s mind.

-Rather than hear about it through dialogue, flashbacks can vividly bring a character’s past to life.

-In all forms of genres, flashbacks work equally.

-Usually, stories are designed to create suspense about what will happen, but flashbacks make them wonder what has happened.

-They are like storytelling and a past, present combination of memories.

People don’t use flashbacks in the script because they have read many lousy screenplays containing many bad flashbacks. But you must write a good flashback to avoid doing this.

How To Write A Flashback In A Script: Emotional Manner

The flashback is written in an emotional manner when a character experiences heightened emotion, showing its reason in the past. It will display as visually what has happened instead of telling a story through dialogue. There could be three types of emotional manner flashbacks.

This flashback prominent the distress and reveals the character’s present trauma; it shows the painful central flaw. The scene distinguishes the present and the past, such as losing someone close and recalling the memory.

This flashback type displays a character’s highly emotional reaction to startling plot development in the present and stand-alone as an illustrative scene. It’s like a flashback tableau in parts throughout the movie, finally revealed at its climax.

In this flashback type, a character regretfully thinks back to an essential happy time in the past while it is worth noticing that he already is going through some problem. It’s a trip down memory lane that shows us how old memory is affecting them right now.

How To Write A Flashback In A Script: Style Manner

You may learn how to write a flashback in a screenplay stylistically while the director decided to predict how it will roll out on the screen.

It is a flashback style that shows a character’s emotion by a memory hit from the past event in a flashback flash or series. It is best to explain as the recollection of the memorable incident often involved no dialogue.

This flashback style is crisscrossed at different times and locations within the same scene in the form of a montage or series of shots used in the film. It could be the same way and treated as the same as a regular montage or series as it happened in the past.

It is a flashback styled with full scene visual to give the audience a more detailed account of what happened in the past or the character’s psychological sight. It always contains dialogue, and you may choose to remain in the past for more extended time, like moving from the full scene to the entire scene.

How To Write A Flashback In A Script: Intent Manner

You must consider few things while adding flashbacks to the story to raise the stakes, reveal character, and advance the story. It would be like a regular scene when you write a flashback in the script as raising the stakes, revealing character or theme, or all of these.

Why Do Flashbacks Need To Be In A Script?

Flashbacks are necessary for the story, and there are these three reasons for it to be in the screenplay.

1. To advance the story

There could be a contradiction that flashbacks move the story forward; if it is placed simultaneously, it can change the entire narrative scope. Such types of flashbacks support the act break at the midpoint in act three or the climax.

Sometimes some character motivation can get left unanswered, so flashbacks can help fix that insight to get to the point by revealing the character.

3. To reveal the theme

There is the flashback or series of it and the theme reflecting the story’s reality, not a character’s outer goal.

Here is all the ways on how to write a flashback in the script; all you need to keep in mind are the technical sequences of emotion, styling, and intent must be related to the story. The emotional setting of flashbacks should be at the mid-point of some traumatic event or incident, whereas styled flashback cover the backstory. It is recommended not to add flashbacks in the screenplay if you miss its entire meaning and explain it. There should be a flow of scenes while narrating the story in the script.