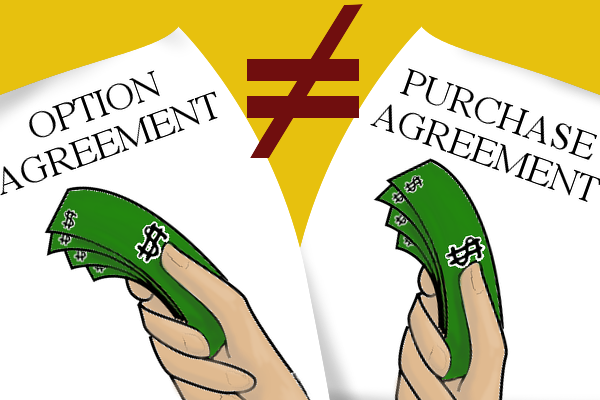 How To Deal with a Screenplay Option Agreement

What Is a Screenplay Option Agreement?

When a filmmaker wants to buy the rights to a book, article, or story to make into a movie, they first have to option the material. An option is basically an agreement between the person holding the rights to the material (the “optionor”) and the filmmaker (the “optionee”) that gives the filmmaker the exclusive right to buy those rights within a certain period of time. In exchange for this exclusivity, the optionee pays the optionor a fee (usually around 10% of what they eventually expect to pay for the rights).

The key terms of an option agreement are: (1) the length of time that the option is in effect; (2) how much the option fee will be; and (3) how much the Filmmaker will ultimately have to pay for the rights (“purchase price”). Most options are in effect for 6-18 months, and many include provisions for extending the option if certain milestones are met (such as securing financing for the project). It’s important to note that an option is not the same thing as a purchase agreement – it’s just an agreement to purchase. The actual purchase happens later, if and when the Filmmaker decides to exercise their option.

Key Points to Know About Optioning a Screenplay

There are a few key things to know if you’re looking to option your screenplay from the beginning. First and foremost, it’s important to have a solid understanding of the process and what’s involved. The next thing to keep in mind is that you should only option your screenplay to someone who you trust and who you feel is qualified to produce the project. Finally, be sure to do your research and understand the market value of your screenplay before entering into any agreements. By following these simple tips, you’ll be well on your way to successfully optioning your screenplay.

What a Contract Should Contain for an Optioned Screenplay

When optioning a screenplay, it is important to have a clear and concise contract that outlines the terms of the agreement. The contract should include the title of the screenplay, the name of the screenwriter, and the duration of the option period. It should also specify how much the screenwriter will be paid for the option, as well as any other compensation that may be due if the screenplay is sold or produced. In addition, the contract should delineate the rights that are being granted to the buyer, and any conditions that must be met in order for those rights to remain in effect. By carefully drafting a contract that covers all of these bases, both parties can avoid misunderstandings and ensure that their interests are protected.

Pros and Cons of a Screenplay Option Agreement

One of the most important aspects of selling a screenplay is determining how to price it. When quoting a dollar amount, some writers like to offer options, or different pricing tiers for the same script. For example, a writer might offer a $10,000 option for the first six months, and $15,000 for the next six months. Other writers prefer to quote a flat fee for the entire project. So, what are the pros and cons of offering options? One advantage of options is that it gives the buyer more flexibility. If a studio is interested in a script but doesn’t have the budget to commit to it right away, an option allows them to hold onto the rights until they’re ready to move forward.

Options also tend to be less expensive than flat fees, which can be helpful when working with tight budgets. However, there are some drawbacks to consider as well. One downside of options is that they can create confusion and complicate negotiations. Additionally, if a project goes into development hell (i.e., it gets stuck in pre-production and never actually gets made), the option will expire without any money changing hands. This can be frustrating for writers who have spent months or even years working on a script only to see it go nowhere.

How Long Should the Option or Renewal Period Last?

In the world of screenwriting, options and renewals are a common occurrence. But how long should an option or renewal period last? The answer, of course, depends on the situation. For example, if a writer is querying agents with a view to selling their screenplay, they may want to include a short option period in order to protect their work while they receive feedback. On the other hand, if a producer is interested in optioning a script but needs some time to raise funding, a longer option period may be more appropriate. Ultimately, it’s up to the parties involved to decide on an option or renewal period that works for them. However, it’s important to keep in mind that the longer the period, the greater the risk that someone else will scoop up the rights to the script.

Role of the Screenwriter During the Option Period

The screenwriter’s role during the optioning period is to continue developing the script and to be available to answer questions from the studio or producer. The goal during this period is to get the script into production-ready shape so that it can be sold or optioned to a studio or producer. This means revise the script based on feedback, ensuring that the story is clear and concise, and making sure that the characters are fully developed and interesting. In addition, the screenwriter should be prepared to answer any questions about the script that come up during the optioning period. By being responsive and available, the screenwriter can increase the chances of getting the script into production.

Does a Screenwriter Need a Lawyer to Option Their Script?

A screenplay option agreement can be an advantageous way for both screenwriters and producers to gain some security in the often-unsteady film industry. For screenwriters, it can provide the opportunity to develop their scripts with less pressure to sell them, and for producers, it gives them the chance to assess whether or not a script is worth developing further without any financial commitment. In order to create a successful option agreement, both parties should be clear on what is expected of each other and ensure that all terms and conditions are met.